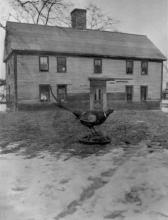 This homestead was once located on the site of 8 Kensington Street and faced south down to the intersection of Poor and Lowell Streets. This was home of Samuel Frye and contained about 28 acres of his farm. The 1850 Town Valuation schedule lists Samuel Frye - Dwelling house $800.,Barn & other Buildings $200., 21 aces adjoining $750, 4 acres Front of School house $200., 2 1/2 acre meadow $50 and Shoe shop $60. total assessment $2060. his personal estate of Farm Stock- $122.

Andover Townsman; Feb. 28, 1902 p.1 - At the auction sale of the Phoebe Frye estate in Frye Village, last Saturday afternoon, the property was purchased for $1625. by Joseph Thompson, of Lawrence. The estate, consisting of a dwelling house of ten rooms and an acre of land, is located on Poor Street.

Thompson must have purchased the property for Jean A. Birnie as the deed is placed in her name on Mar. 8, 1902.

David Birnie died on August 18,1907 and Mary Birnie on March 6, 1919. Both are interred at Christ Church Cemetery.

Jean Birnie owned and occupied the property for twenty years before selling to the American Woolen Company on Sept. 9, 1922. By this time construction of Shawsheen Village was well under way as much of the former Samuel Frye Farm had already been purchased through agents for the company. The Frye Farm was located at the intersection of Poor and Corbert St. which ended at the intersection of William & Poor.

William M. Wood then had the Birnie house moved to this location. There were two houses on the property at that time, the old Frye house #67 which was razed and the Queen Anne home #69 which was moved. It is noted on the Shawsheen Village Map of 1922 as the "Old Birnie" house. Phoebe Frye acquired the homestead and one acre of land prior to 1860 as she is listed on the Valuation schedule for dwelling house, shed and one acre of land. Phoebe took a mortgage on the property on Sept. 29, 1886 and later paid it off.