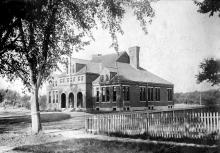 The current Indian Ridge playground was once the site of the Abbott Village schoolhouses. Three separate school buildings have occupied this site from 1851–1958. Cuba Street was constructed between 1829-1834. The Village School District was established on November 3, 1828, divided off from the Center School District, as was the new Phillips School District at that time.

The first one room schoolhouse was built on the site of #3 Cuba St. in the Spring of 1829 on a small parcel of land. It served the district until 1851. A new and larger school was needed and the site at the top of the hill was chosen. The land once belonged to Joseph L. Low who sold to Abiel & Eliza Russell on October 13, 1836, b. 303 leaf 26 – Salem
The deed; “Know all men by these Presents, That Joseph L, Low of Andover, County of Essex and Commonwealth of Massachusetts, Gentleman, in consideration of One hundred and twenty five dollars paid by Abiel Russell of said Andover, Manufacturer, the receipt whereof I do hereby acknowledge, do hereby give, grant sell and convey unto him the said Abel his heirs and assigns a certain piece of land situated on the Northwesterly side of the new road three rods wide laid out by John Flint and Calvin Damon, beginning at the corner of Damon and Farnham’s land near Marland’s land, thence running Southwesterly to near a stone house built and formerly owned by Wm. Abbot and is bounded as follows, viz. Beginning at a stake and stones on Sd. street, thence North sixty five degrees West to Elijah L. Herrick’s land to a stake and stones, sixteen rods; thence Northerly and Westerly & Northeasterly about thirteen rods to Sd. Herrick’s land to a stake and stones, thence South sixty five degrees East by land sold to Aaron D. Mayo nineteen roads to the street aforesaid, thence South twenty five degrees west ten rods on Sd. Street to the first mentioned bound containing about one acre and thirteen rods.”
The deed was signed by Joseph L. Low and wife Sally Low and witnessed by Sarah J. Low and Caroline A. Low.
[Major Joseph L. Low b. 1784 d. Dec. 10, 1853, married Sarah (Sally) Wood, b. 1784 d. November 12, 1872 daughter of Moses and Sally Wood. Low built his home in 1820 at 70 North Main St., razed in 2011, His homestead included all the land now used as the Town Yard, Lewis St. and Buxton Ct.,]
Abiel Russell was brother-in-law to Abel and Paschal Abbott who owned the Abbott Mill on Red Spring Rd. Russell was the overseer of the mill. The mill closed and was sold to Smith & Dove in 1843.

The Inhabitants of the Village School District purchased the lot from Russell on May 31, 1851 for $300. They voted a sum of $2000. for the land and new schoolhouse. The building was 64’ long by 26’ deep containing two school rooms and a small room and entry hall between. The first meeting was held in the new school house on Nov. 29, 1851. By all accounts the wooden building resembled the West Centre School house and served the Village well until 1861.

The child labor laws in Massachusetts changed in 1861 requiring all children under the age of 14 to attend school for consecutive weeks. The district was faced with more than 40 new students who arrived one Monday morning for instruction. The district moved quickly and voted on May 20, 1861 to build an additional school building for Primary Children to alleviate overcrowding. They appropriated $700 to build one room school building to accommodate the mill students. It was built to the north of the schoolhouse.

In 1892 a new school was considered at Town Meeting in Mach and appropriated $8500. Architect Reagan of Lawrence designed the new brick four classroom schoolhouse with an assembly hall on the second floor. The two existing buildings were moved to the side of the lot so construction could begin.

In March 1893 the town appropriated $11,000 to be used for the new school. Contract disputes delayed the opening until October 1893. The old schoolhouses were sold off at auction. June 22, 1894 AT p.1 "The old Abbott Village Schoolhouse buildings are advertised to be sold at auction tomorrow (Saturday June 23) afternoon at 2 o’clock by auctioneer Rogers."

June 29, 1894 AT p. 1 – Sold At Auction – Old Abbott Village Schoolhouses – The old Abbott Village schoolhouse buildings were auctioned off by Rogers last Saturday afternoon. The large one brought $36 and was bought by the Henderson Brothers who will use it as a carpenters shop. The small one was knocked off to Andrew Thompson for $84 and he will convert it into a dwelling.

John Henderson moved the 1851 schoolhouse to 76 Red Spring Rd. for a carpenter workshop. August 1, 1894 AT – A part of the old Abbott Village schoolhouse it seems, is now the Red Spring pavilion, where a dance is advertised for every Friday evening, with music by the Lowell orchestra. To-night Miss Maud Hopkins, child cornetist [sic] from Lowell, is advertised to play.

The 1861 Primary School building was moved across the street to 28 Cuba St., onto Andrew Thompson's property at 30 Cuba.

The new schoolhouse was renamed the "Indian Ridge School" in 1896-97 after the newly acquired Indian Ridge Reservation created and owned by AVIS nearby.

In 1952 the school district was incorporated into the new West Elementary School District and the building was closed. In August 1957 the residents of Cuba St. and the area petitioned the Selectmen to raze the building and build an appropriate playground for the children of the area. They also wanted a storage shed and toilet facilities, similar to the one in Ballardvale. The shuttered building was razed in April 1958. The playground was upgraded and toilet and shed facilities constructed on the site. In 1957 the registration of 277 children for the summer playground program had sealed the deal.

Also on the site is a War Memorial dedicated on Memorial Day 1947 to the men of Abbott Village who gave their lives during World War II.
It reads; Indian Ridge Community – In Memory of Those Who Died in Honor In World War II –
Julius H. Cieslik – Charles L. Valentine, Jr. – John Guthrie – John C. White – Albert V. Winward