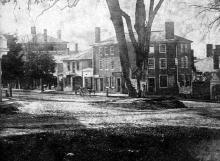 The Federal period brick block was built in 1814 by David Holt Jr. and Isaac Osgood Jr. The building housed three stores on the street level with offices and a meeting hall on the top floors.
Hip roof

The old Federal period brick block was said to have been built in 1812 by a gentleman named Osgood who later settled in North Andover. The deed of May 3, 1814 at Salem has the land being sold by Benjamin Ames Esquire of Bath, Massachusetts [Maine] to David Holt Jr. and Isaac Osgood Jr., both of Andover, Traders. Holt & Osgood paid $400 for the land on the Westerly side of the Essex Turnpike and on the Southeasterly side of the street leading from Foster’s Tavern {Elm House] to the meeting house. It was Holt & Osgood who built the brick store probably in 1814.

It is unknown at this time how long the partnership continued or what retail business the men established in their new building. The building housed three stores on the street level and offices and a meeting hall on the top floors. At some point the partnership was dissolved as all of David Holt's estate was placed into a trust. Hobart Clark and later John Flint were appointed trustees and guardians by order of the court for "David Holt, Yeoman, was given to excessive drinking and idleness." Some of his property had to be sold off in 1829 and 1830 to raise $4050 to pay Holt’s debts. The trust notes two brothers, Uriah Holt Esq. of Norway, Maine and Ephraim Holt of Greenfield, NH. In April of 1830 David Holt gives trustee John Flint, one undivided half of the property with a brick store thereon on the corner of the Essex Turnpike and the old County road leading form Mayo’s Tavern {Elm House] to the meeting house of the South Parish. This was the tenth parcel in the deed of which the last two are owned in common with his wife Sarah Abbot Holt. David Holt died on October 3, 1836. Sarah A. Holt and heirs of David Holt, sell the “brick store near Merrill’s Tavern {Elm House] and next to land of Mark Newman excepting the small wooden building now occupied as a bookstore and not owned by me.”

On December 10, 1851 Henry W. Abbot purchased the land and store for $2500. “The brick store was occupied for many years by Henry Abbott and his son Henry W. Abbott. In the hall over this store the “Peace Supper” was held in 1815.”

When Mark Newman purchased the adjoining lot at 9-11 Main Street on November 19, 1829 the deed reference notes the lot line as 13 feet from the south end of the brick store occupied by Messrs Kidder & Swift.

The Post Office was located here in the 1850’s in the corner store facing the square. In the Andover Advertiser Feb. 19, 1853 a Mr. N. Ellis House Painter gives the Post Office building as his place of business. The Post Office later moved to the Town House in 1859 and remained there until the Musgrove building was built on the square in 1894-95.
Oct. 5, 1866 AA - Ezra H. Valpey has taken the room in Abbott’s building, recently occupied by Mr. Wolfendale as a barber shop, and is to fit it up for a meat market in connection with his butchery business. Valpey remained here until they bought out John H. Flint in April 1871. Flint’s market was in the Brick house next to the Town House 1866 - 1871. After the renovations Valpey moved in June 1871.

June 21, 1867 AA - Henry W. Abbott is about fitting up a store in the south end of his brick building on Main Street, for Messrs, Corse & Townsend, These gentlemen will unite the boot & shoe business of their two establishments in the new locality. Formerly William Corse was located in the town house and purchased the business of John T. Shattuck on Essex St. in March 1866 with new co-partner Milton B. Townsend. Shattuck’s store 10 Essex St. was in the Beard building and Townsend managed this store until they merged both into the new brick building location.

Sept. 25, 1868 AA – Messrs. Corse & Son keep a good assortment of boots & shoes at their store on Main Street. A supply of Zephyr overshoes manuf. by H.G. Tyer of this town, an excellent article for the ladies.

Sept. 13, 1867 AA - James Johnson has removed his boot & shoe establishment from School Street to No. 1 Central Street, opposite the Baptist Church. [The small free standing wood building to the right of the brick building in a period photograph.]

June 9, 1871 – H.P. Holt in connection with his extensive butchering business has opened a meat and vegetable market at the old stand, corner of Main & Central. Their ad states – the shop formerly occupied by the Valpey Brothers.

June 6, 1873 – Co-partnership of Corse & Stevens – dissolved – Now continued by Charles A. Stevens at the old stand on Main Street. Boots & Shoes shop.
Barber Smith took over their [Valpey] space on the square, noted by E. K. Jenkins. Perhaps he meant Wolfendale before Valpey.

Charles L. & Sarah N. Carter purchased the old brick block on September 2, 1878 from the estate of Henry W. Abbott. Carter, the proprietor of the Mansion House on the Hill, bought Abbot’s business in 1877 and a year later acquired the building. He sold the hardware business to McLawlin & Baker in 1880.

The following account appeared in the Andover Advertiser;
February 22, 1884 Friday pg. 2 col. 3 ANDOVER ASHES - Destructive Sunday Morning Fire. A Loss of Nearly $17,000
The most destructive fire which has visited Andover within a decade broke out shortly before 4 o'clock on Sunday morning, and before quelled, three of the most frequented buildings in the historic town were destroyed bare walls alone being left standing. The origin of the fire is a matter of conjecture, but the sentiment in the town appears to be that it was incendiary. The section burned over is opposite Elm square on Main street, near the junction of Central street.
The fire originated in the confectionery store and picture frame manufactory of Harry S. Tilton. This building had a brick front with wooden ell in the rear and in the latter the flames were first discovered. After 11 o'clock Saturday night, there is said to have been no fire in the stove in the ell, nor was there supposed to be any materials there which induce spontaneous combustion.

The building was of two stories the upper being unoccupied and so quickly did the flames spread, that the fire department of the town was not upon the scene in half an hour, before the fire had eaten its way into the building of J. J. Brown on the south and the brick building on the north, occupied by Johnson's Boston Express, McLawlin & Baker, hardware dealers, the Royal Arcanum and H. P. Wright, boot and shoe dealer. The latter building was of brick, three stories, the second floor being occupied for storage purposes by McLawlin & Baker, and the third by the Royal Arcanum as a meeting hall. Brown's building was wood; he occupied the lower story as an apothecary store, G. W. Herrick having a portion of the same, devoted to Clock and watch making. Here also was the telegraph office and in McLawlin & Baker's was the telephone office.
Communication by either service was destroyed until about 5 o'clock Sunday afternoon when Mr. A. Bliss, the telegraph operator, succeeded in getting his instruments into position.

The local fire department responded promptly when the alarm was sounded, Andover Steamer No. 1 being ably seconded by the efforts of the Phillips academy students, who with their hand engine did effective and many times perilous service. The flames were fast getting beyond the control of the plucky firemen, when Tiger engine, of this city, and Union Hook and Ladder Co., were summoned to the scene and arrived there in less than twenty minutes from the time they received the alarm. They went to work promptly with a will, and it was mainly through their efforts that the town business portion of Andover is not now a ruin. The wind which prevailed, though comparatively slight blew sparks to the square of S. G. Bean, which is covered with wooden buildings, but that gentleman had a force employed drenching the roofs, and fortunately escaped loss. The Ballardvale fire department arrived late to do much service, but what was done by them was gratefully appreciated by the townspeople.

The three buildings are a total loss; two which were of brick, owned by C. L. Carter, of the Mansion House, were insured for $3500, placed in equal portions in the Merrimack, and Trader's and Mechanics' companies. His loss is not less than $4000. McLawlin & Baker saved little of their goods, and their loss is estimated at $5000, on which they have an insurance of $4000 divided equally in the Aetna and Hartford companies. J. J. Brown had an insurance of $2000 on the building, in the Merrimack, and $3000 on stock, in the Aetna; his damage is estimated at $5500. H.S. Tilton had an insurance of $700 in the Providence Washington and this will fully cover his loss. H. P. Wright had an insurance of $1000 in the above company, and as most of his goods were saved, it is not thought his loss will exceed $200. The Royal Arcanum lost all of their fixtures, and new regalia are, amounting to $500, on which they had no insurance. George W. Foster, Esq. who occupied an office with his father, Hon. Geo. Foster, in the Brown building, lost a valuable law library, estimated as worth $600, on which there was no insurance. Hon. Mr. Foster's papers were in a safe and were preserved unharmed. Mr. Johnson, of the express company, sustains a loss of $450, on which there was no insurance. Fortunately, however, his most valuable property was stored in his safe, and there were few packages in the office awaiting delivery. G.W Herrick, watchmaker, also had his valuables in a safe, and his loss to stock and fixtures will not exceed $100. The total loss to buildings and stock is estimated at $17,050, on which there is an insurance of $14,200. The insurance was all placed with Mr. J. A. Smart, of Andover.

March 14, 1884 AA - pg. 2 col. 9 John J. Brown is repairing and enlarging his wooden business block on Main St. which was so badly burned by the late fire. Hardy and Cole do the carpentry work.
Charles L. Carter rebuilds on the same lot. But acquires more property on adjoining lots.
Jan 16 1885 AA - pg. 2 col. 9 - The three stores in the first story of Carter’s block on Main Street have been let. One is to be occupied for a grocery, another for a millinery and dry goods, and the smaller one on the corner for an office; by John Cornell, coal and wood dealer. There is another store in the same block, on Central Street, and another in the basement under it not yet let.

Feb. 27, 1885 AA pg. 2 col.9 - H. A. Bodwell has opened furniture warerooms in Carter’s building on Main Street. It is his intention to keep on hand and for sale, a full assortment of the most desirable goods in his line of business. Carpets of the latest patterns and all grades may be found at the establishment, and upholstering and repairing will be done at short notice and reasonable prices. [See advertisement on pg.3 col. 3 H.A. BADWELL – next issue corrects his name to Bodwell.] 1946 - Delco Meat Co; Lawrence Gas & Electric