The BallardVale Historic District was established by the Town of Andover in 1995 with the intent to preserve the significant, distinctive architecture and rich character left to us by the 19th and 20th century residents of BallardVale. It is administered by a Commission that reviews all proposed exterior changes to buildings located in the district.

some historic houses in the BallardVale Historic District 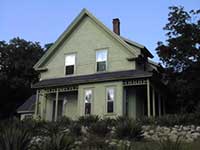 Historic District Commissions do not prevent changes from occurring, nor do they prevent new construction. Their purpose is to ensure that changes and additions are harmonious, and to prevent changes that might detract from the aesthetic and historic values of the district. The commission does not halt growth, but allows for careful consideration of change. A local historic district is not meant to be burdensome to property owners, but is established to administer change and enhance the value of the district.

The Commission consists of seven members and two alternates, appointed by the Town Manager and approved by the Board of Selectmen, to a term of three years. The Commission shall include, when possible, representatives from the following groups: Andover Preservation Commission; Andover Historical Society; Greater Lawrence Board of Realtors; Andover Planning Board; BallardVale business community; a resident/owner of property in the district, and a registered architect. If possible all members shall be resident/owners in the district. The Commission, under a specific set of regulations and guidelines, deals with exterior architectural changes. The Commission is required by law to review the appropriateness of most exterior design changes, additions, new construction and demolition.

Any owner/resident within the district contemplating work on any part of his/her property that is “visible from a public way” should notify the BVHDC by filing an application for changes to be made. “Work” should be interpreted to include alterations, rebuilding, new construction, restoration, removal, demolition or changes in exterior composition. “Building” refers to a combination of materials forming a shelter for persons, animals or property. The BVHDC guidelines include, but are not limited to, architectural style, general arrangement and setting, building materials, style of windows, doors, lights, signs and other exterior fixtures.

No building or demolition permit may be granted for exterior work in the district without a certificate from the BVHDC. The BVHDC recommends that applications for a certificate be submitted 60–90 days prior to the commencement of any project. Applications can be obtained online or from the Department of Community Development and Planning on the lower level of Town Hall (36 Bartlet St).

BVHDC decisions are guided by The BallardVale Historic District By-Law, Massachusetts General Laws — Chapter 40 C, Review Guidelines of BVHDC, and the Rules, Regulations and Procedures of BVHDC. Copies of all these documents are available for review at the Department of Community Development and Planning at Town Hall, Memorial Hall Library (in the Ballardvale file in reference) and at the Andover Historical Society.

Completed applications should be returned to the Department of Community Development and Planning a minimum of 14 days prior to the regularly scheduled meeting of the BVHDC (generally the first Wednesday of every month).

The BallardVale Gazette is a newsletter of the BallardVale Historic Distsrict Commission and is published 2-3 times per year. It is mailed or emailed to each property owner in the District, as well as to town officials, town departments and anyone who has notified the Editor of their desire to be on the mailing list.

Recent editions of the Gazette are listed below and links are provided. 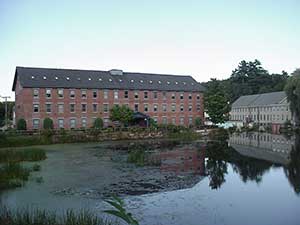 the mill at 204 Andover Street

The BallardVale Historic District encompasses a tightly knit, though highly diverse community that has significantly retained its 19th century characteristics. BallardVale, the first of Andover’s planned mill villages, is located on the banks of the Shawsheen River. Water power was first harnessed by Timothy Ballard, who operated grist and saw mills, and then by the BallardVale Manufacturing Company that built a 200-foot long dam.

The Historic District boundaries circle central BallardVale, with Andover Street as the main street and Center, Marland, Dale and High Streets laid out with comfortable house lots in an 1848 subdivision. Portions of High Vale Lane, Chester, Oak and Tewksbury Streets and Clark Road are included. The original BallardVale Manufacturing Company (est. 1836) sits on the Shawsheen River and is a four-story brick structure with granite trim and a gable roof. 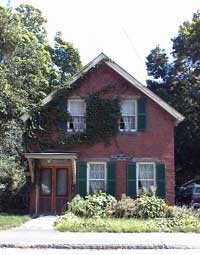 Single, multi-family and boarding houses were built in the popular styles of the time. The buildings at 6–8 Dale and 21 Tewksbury Streets represent the Greek Revival style, although the former is a brick duplex and the latter a wooden cottage. The picturesque Gothic Revival style is depicted at both 14 High Vale Lane and 51 Center Street, whereas 174–176 Andover Street (formerly the railroad depot) and 228 Andover Street illustrate Italianate architecture. BallardVale was added to the National Register of Historic Districts in 1987.