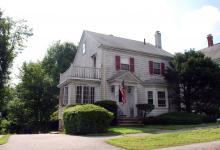 The style of this house suggests 20th century construction of Colonial Revival period. Town assessors office give a date of 1937.

The property deed reference in 1890 to Daniel Collins states, "premises owned and occupied by Joseph Midgely, lately deceased.." Joseph Midgely was baptized at Christ Church on Aug. 17, 1845, son of James and Hannah Midgely. His obituary states he lived on Cuba St. for 16 years, from 1874 until his death on Oct. 7, 1890. He enlisted in the Civil War, was recalled by his father as he was under age, then joined again and was on board the "Hartford" under Admiral Farragut at the battle of Mobile. Joseph never married, became a carpenter, learning his trade under George S. Cole, later to become Hardy & Cole. Joseph owned house lots at 60 and 64 Red Spring Rd. but this lot is found in deeds under an assignment of a mortgage.

The Midgely house, was the Samuel & Hannah Shattuck place listed as the only house on the east side of Cuba St. on the 1852 map of Andover. James Midgely purchased the mortgage of Mrs. Hannah Shuttuck, wife of Samuel Shattuck from previous holder Daniel Abbott. James Midgely married their daughter Hannah Shattuck on Dec. 20, 1840. The mortgage deed for $350.50 was assigned to Abbott on April 12, 1847 and to James Midgely of Worcester, MA on Apr. 13, 1870. James transferred the mtg. assignment to Joseph Midgely, living in Hyde Park, MA on Sept. 19, 1871. Joseph died at age 45 and is interred at Christ Church Cemetery. His Heirs, nieces and nephews inherited his estate and nephew Charles O. Shattuck sold the property "with buildings" to Daniel Collins on Dec. 1. 1890. to Daniel for $1155. Collins then sold to Daniel Hart on Jan. 13, 1891.

The home currently on this site is of a later period Colonial Revival and was probably built by and for the Hart family. The original Midgely house may have been purchased and moved off the site to another location on Cuba St. when this house was built or it was razed. On the 1872 map an S.H. Harnden is listed at this site.

Daniel Hart built the apartment house building next door, now known as the "Hart Block" in 1907. June 28, 1907 AT - "Daniel Hart is to build a double tenement house on a lot of land north of his house on Cuba Street." Daniel and wife Mary C. Hart transferred ownership of this house to Mary in October 1907. The 1910 valuation schedule refers to the New Block valued at $3800 and 12 Cuba $1000. Both on the same acre of land at $700. In 1919 the property was divided between brothers John J. and Cornelius J. Hart. Cornelius and his wife Catherine Elizabeth owned the Hart Block in 1931 and it remained with the family until 1953. The Harts were renting out their properties on Cuba Street and were living at 20 High Street in the 1920's and 1930's. Cornelius and wife Elizabeth moved back to 12 Cuba by 1938. Cornelius is listed as a mill operator at the American Woolen Co.