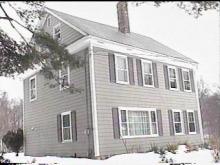 The gable pediment triangle is a Greek Revival element. The home was once cedar shingled and left natural to weather to a russet brown. A long wrap around open porch across the front facing South Main St. and along the south side on Cottage Rd. All the windows were 6 over 6 double hung windows each flanked with Paris green shutters which added to that Cape Cod weather beaten charm.

The 1900 Census lists the three sons with Daniel E. as an apprentice shoemaker with his father. The census list this road as Fosters Lane. Daniel sold the two parcels of land to William P. Shattuck on Mar. 29, 1902 and moved to Kinston, MA. Daniel died Dec. 4, 1902 age 55 years

Eleanor & Charles lived in the home at 1 Cottage Road. They surveyed and parceled off the lad into house lots in September 1911 by Ralph D. Hood Civil Engineer (Map #147). Three new roads were created to access the properties off Boston and County Roads. Two roads remain undeveloped "Paper Streets" today although they appear on a plan in 1966 as Jackson and Lafayette St. Charles died Feb. 19, 1912 in West Newbury, MA. Eleanor remarried Dec. 6, 1913 to Edgar Manning Earley b. Dec. 13, 1873 in Topsfield, MA, son of Charles and Mary E. (Margeson) Earley. Edgar had five children from his first marriage. Edgar died Dec. 26, 1917 in Andover. Eleanor married a third time to a man named Hamel in the 1920’s and then to Herbert Maynard in the 1930s. Eleanor owned for 29 years when she sold to Francesco & Caterina Direnzo on Feb. 9, 1938.