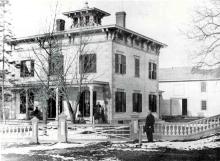 The John Flint mansion was built in the spring and summer of 1854 with a view to Elm Square. Built in the Italianate Style, with heavy brackets accentuating the entablature of the third story attic, the house was one of only a handful of homes to be built of this style in Andover. Before construction could begin Flint’s older residence had to be removed from the site. The mid 18th century house, first owned by John Flint’s father, was lifted off the foundation and moved to 27 Summer Street. On September 16, 1854 AA reports– The house of John Flint, on the village square, is nearly completed and attracts the attention of both town’s people and strangers. The external and internal construction on the building seems to gratify visitors exceedingly.

John Flint Jr. was a cabinet maker and carpenter in his early life. He purchased a lot of land of about 7 square rods from Thomas C. Foster on November 13, 1818. This lot at the corner of Main Street & Post Office Ave. came with a deed restriction. He could build and improve the property “except the land north to the old county road as common and never shall be occupied with any buildings or fences nor anything else that shall injure the looks of said common.” John built his cabinet shop on the corner of the Essex Turnpike next to the common in front of the Foster’s Tavern. Construction probably followed in the spring of 1819. Flint sold the property to Benjamin H. Punchard on Nov. 1, 1828 for $2000 which included “the buildings since erected by me”

John Flint had developed an aptitude for accounting and finance and became the first treasurer of the Andover Savings Bank 1834-1870. Also the treasurer for 12 years of the Andover & Wilmington Rail Road incorporated in 1833, later to become the Boston & Maine Railroad. John Flint was a prosperous business man and died June 21, 1873 at the age of 81. Flint’s wife Mary died in 1888.

John Henry was the youngest of the Flint’s children. John H. married Frances Anna Tyer, daughter of Henry George Tyer, the founder of the Tyer Rubber Co., on April 15, 1874 John H. & Frances had two daughters, Gertrude Louisa who married Franklin H. Grier and Nellie Frances who married Joseph A. Rand. John H. became sole owner of his father’s house in April of 1883 and quickly put his mark on the house. June 22, 1883 AA - John Flint put in a bay window over the front door of his house on Elm Square.

John H. was also a successful business man in real estate and the market. He became the president of the Tyer Rubber Co. in 1876-1882 and treasurer from 1882-1914. Flint also served as director and president of the Andover Savings Bank, director of the Andover National Bank and the Merrimack Mutual Fire Insurance Co. He was active in town affairs and served as selectman, assessor, town clerk, treasurer, chairman of the Board of Public Works, Chief of the Fire Department and served on several committees. He was past Master of St. Matthew’s lodge, member of the Andover Lodge of I.O.O.F. and the Andover Club.

Flint purchased the Elm House in June of 1892. The old hotel was no longer a profitable operation and after several meetings with local businessmen Flint sold the building for salvage in April 1894 and began construction of the Musgrove Building on the site of the former common. It is interesting to note that he was somehow able to build on the very common that both Thomas C. Foster and his father John Flint had placed a deed restriction on years before.

The building committee trustees consisted of Albert W. Lowe the Worshipful Master of the lodge, Walter H. Thompson, Henry A. Bodwell and William Odlin. On November 17, 1922 a general meeting was called in the lodge room and 69 men signed applications for membership. The new lodge was first called “The Masonic Club of Andover, Mass.” but was later changed to the “Andover Square and Compass Club”.

The house became comfortable quarters for the lodge and opened for inspection on January 1, 1923. The rooms provided a reading room, card rooms, billiard hall, reception parlor and committee rooms. The former Flint barn to the rear of the property was converted into an assembly and function hall equipped with a kitchen, serving counters and tables. June 3, 1927 AT - Square & Compass Club New assembly hall opens in the Flint Barn on June 2. This hall was used by several community organizations including the “Eastern Star Chapter” and the “Thimble Club”, an organization of the women of several of the fraternal members. The town used the hall as a polling place for several years and in 1944 it became the meeting place for “Clan Johnson, No. 185, Order of Scottish Clans”. The Andover Chapter of the American Red Cross used the club briefly in the early 1950’s.

October 27, 1963 the members of St. Mathews Lodge at a special meeting elected, Robert B. Parker, Raeburn B. Hathaway, J. Elwyn Russell, Warren A. Maddox and R. Kingman Webster as Building Trustees of said lodge and were instructed to sell the property. “The consideration for said conveyance being the construction of a new Masonic Temple on lot B as shown on plan”

The property was divided and a new lodge erected to the rear of the property fronting on High Street. The remaining parcel with the house and hall were sold on July 10, 1964 to Danton Realty Trust. The Realty Company was partnered by L. John Davidson, Phidias G. Dantos and Urville J. Beaumont. The former Flint Mansion and Masonic lodge buildings were razed in April of 1965 for the construction of the modern brick office building that became known as the Standard International Building the first tenants. Originally Standex International the name was changed to Standard International Corporation of Ohio in 1973.

Danton Realty sold the property the “Trustees of Village Improvement Realty Trust” on April 18, 1968; Warren S. Cooper, Donald Junior and Peter S. Manke, trustees. Standard International then purchased the building in 1971. Software International formerly Geisub II Corporation of Delaware acquired the property in Sept. of 1980 and sold to Elm Square Realty Trust in 1983. The building was then renames One Elm Square and the office building was divided in office condominiums.