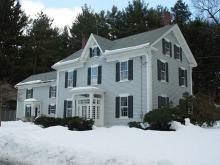 Street named for Adoniram Judson, pioneer missionary trained at Andover Theological Seminary who was sent to India by American Board of Commissioners for Foreign Missions. Judson was later sent to Burma as representative of American Baptists. Road opened in the 1920s when the Leonard Wood house was moved from Bartlet Street in 1920's (Bessie Goldsmith). Bessie claims that Wood and the brick Brewster House were the only houses on street until early 1950's.

This home was originally built on the northeast corner lot of the present Cochran Chapel at Phillips Academy. The house faced Bartlet St. and was located at the corner of Wheeler St. The home was sited behind the former Headmaster's residence "Samaritan House" at 2 Chapel Ave. now the site of Cochran Chapel. In 1900 the Parker property was numbered #79 Bartlet and the Eaton - French house on the opposite corner was #77. When Bartlet St. was renumbered Eaton - French House was given the number 79 Bartlet.

This home traditionally carries the name "Leonard Woods House" after the Reverend Leonard A. Woods who was "inaugurated as Abbot Professor of Christian Theology at Andover in 1808" of the Andover Theological Seminary. Woods however never lived in the home as it was built by his daughter-in-law Hannah H. [Woods] Parker. Hannah H. W. Parker purchased the original 1/2 acre lot from the Trustees of Phillips Academy on Bartlet Street for $450 and had the house built. The deed sale was voted by the Academy on February 15, 1854 and recorded on Nov. 4, 1856. Rev. Woods died six months after the sale vote of the lot to his daughter-in-law Hannah.
The 1860 Andover Valuation Schedule lists Mrs. Hannah H. W. Parker; Center District, 1/2 acre with Dwelling house $2800 and Money $2800.

Leonard Woods resigned his teaching post in 1845 after 38 years. The following year his beloved wife Abigail Woods died on Feb. 20, 1846. She was interred in the Chapel Cemetery on the campus the Andover Theological Seminary, now Phillips Academy Chapel Cemetery. Leonard would later re-marry on Nov. 5, 1846 in Hartford, CT to Lucia J. (Jones) Ives, the widow of Dr. Ansel G. Ives of NY. Doctor Ives died on Feb. 5, 1838 in NYC. Ansel & Lucia Ives had two sons Edward and Leonard W. Ives. Leonard Woods died on August 25, 1854 in Andover and was interred with his wife. Woods headstone was erected by his students in his memory and contains a profile portrait of the Professor.

In the 1855 Mass. State census Hannah H. W. Parker has moved to Andover and appears to be living on Main St. Harriet is now age 50 and is running a boarding house. Children; Elizabeth Abby Woods age 30, George H. Parker age 16 and Harriet T. Parker age 11 are with their mother. Hannah has one domestic living in the home where she is boarding 15 male students of the Academy.

Hannah's son George H. Parker enlisted in the Army during the Civil War, married when he returned on on Oct. 8, 1868 in Fitchburg, MA to Elizabeth S. Mahon b. in Ipswich, MA daughter of Thomas & Mary W. Mahon. George H. Parker became a druggist in Andover with his store on Main Street.
Daughter Harriet T. Parker married on June 13 1865 to Rev. Asher H. Wilcox b. Norwich, CT. son of William B. & Mary H. Wilcox. They lived in Marblehead, MA. Harriet H. W. Parker died in 1881 and her estate went to her children.
George H. Parker's wife Elizabeth S. died in June 1885 and George died in 1902 of tongue and throat cancer. Elizabeth A. Woods never married and sold her share of the property to her half sister Harriet P. Wilcox on Apr. 11, 1904. The house was then acquired by the Trustees of Phillips Academy by 1908.

The Judson Rd property was once owned by Isaac Abbot in 1808. Abbot took a mortgage from the Trustees of Phillips Academy on Sept. 3, 1808 this lot being the 3rd parcel. Book 184 leaf 137. Abbot defaulted and the Trustees foreclosed in 1823. Adjudication - Equity Action Abbot Vs. Trustees of P.A. by Supreme Judicial Court, Ipswich, MA on the 3rd Tuesday April 1823. Case #307 awarded in favor of Phillips Academy.
Robert E. Maynard- listed at 1 Judson Road in 1977

The property was sold on June 21, 2019 to Beverly J. MacLeod and Janet Mitchell. The plans are to remove the home and develop the property.