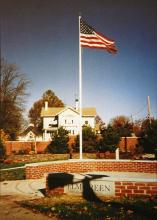 The “Elm Green” Memorial Park was constructed in the spring of 1995 to honor the Veterans of World War I. It is the second memorial to be built on this site. At the end of WWI on November 11, 1918 and with the return home of our troops, plans were discussed for a suitable memorial to our fallen Andover heroes. In 1920 after several plans and sites had been reviewed and rejected, a group of townspeople finally saw to the construction of a memorial wall at this site. The triangular parcel had long been a gathering place for residents to sit under the Centennial Elm, listen to concerts and wait for the trolley cars that stopped at this location. Its proximity to Memorial Hall Library across the street was also a factor in the choice of this site.

The first memorial was a long red brick retaining wall with eight cast cement pillars extending along High Street. Capstones finished off the top with one lamp post mounted at each end of the wall. A wide bench in the center of the wall projecting inward from High St. provided seating. The wall along High St. was low enough to sit comfortably on its top. The west side of the wall facing North Main Street was about 5 feet in height. Single benches had been added to the lawn and a large evergreen tree planted, in the 1950’s, occupied the center of the lawn.

“The Wall” served a number of generations of Andover’s younger people as a popular hangout. The Green itself was not used extensively and over the years became neglected and deteriorated along with the wall. In 1983, the present Elm Green was conceived by the Andover Patriotic Holiday Committee but failed at that time to generate required Town official support.”

The Elm Green project was revived in 1993. Dennis Ingram, an Andover resident, was retained and architect after a public solicitation for professional services. Work began in the Spring of 1995. Newton, MA contractor, Your Space Landscape Design, Inc. was awarded the contract. Elm Green was dedicated on Veterans Day, November 11, 1995. The total cost was $70,000 financed by $38,000 in Town funds and $32,000 in private donations. In kind donations included granite “at cost”, the in-ground sprinkler system, a flagpole and seasonal flowers. The site was cleared and prepared for construction by the Town of Andover.

Historical perspective of the site:
This corner lot was once owned by Sarah Barker when Elm Street was known as the Boston to Haverhill Road and the way to the North Meeting house. Main Street or the “Essex Turnpike” was not constructed until 1806-08. The Ames Tavern was across the street on the site of the rear section of the Musgrove building and the Elm Block.
On July 6, 1793 Sarah Barker sold a 1¾ acre 29 poles lot of land to Dr. Abiel Pearson for 9 pounds. Dr. Pearson had also purchased a 4 acre 98 poles parcel on March 23, 1791 from John Lovejoy, which was a portion of Lovejoy’s homestead property. The price was 13 pounds, 16 shillings and 9 pence. Dr. Pearson built a beautiful Federal style home on the Barker lot facing the cross roads that would later become known as Elm Square. (8 High St.)

Sarah Barker sold another parcel of land for $30 to the 16 men of the South Parish on June 13, 1794. The group included Dr. Pearson, whose land it abutted. The parcel “beginning at an angle of the road, leading from Boston to Haverhill and the new road leading from my house to Andover Merrimack Bridge from thence running northwesterly by the new road to Doctor Pearson’s land, recently purchased of me…” ….. “containing five or 6 rods be the same more or less, to above named to their heirs forever, for the sole purpose of accommodating the public and shall lay as open common and highway forever”…. [most likely High Street is the new road].

This triangle of open land on the north side of Elm Square would become a focal point for public gatherings as was the former green located on the site of the Musgrove Building. During the 19th century at the edge of the former Punchard property a flag pole and bandstand had been erected by the town residents for concerts and celebrations to be enjoyed in Elm Sq.

The massive wooded flagpole was a two tiered construction resembling a ships mast. Our flag was “flung to the breeze” on the 4th of July, the beginning of the Civil War, every patriotic event and when a new administration took office. Band concerts were held here, first on makeshift planks and later an octagonal open bandstand.
Benjamin H. Punchard would purchase Dr. Pearson’s house on April 18, 1829 for $2500. The deed included, “also the right title and interest which I have in and to the land in front of and lying between the premises and the road which for some years since was thrown open and still remains as common.”

For 19 years Benjamin and wife Martha (Marland) lived in the Pearson mansion. In 1848 Benjamin built a new home on the site. The former Pearson home, was moved off the site and relocated to #33 High Street. The Enterprise Bank now occupies the former Punchard-Barnard house. Punchard estate sold the property in 1872 to William & Sarah Whitman who held for 19 years. Peter D. Smith then purchased the homestead on June 9, 1882 .

September 1, 1882 AA - The band gave a fine concert at their stand in Elm Square on Friday evening. At its conclusion the members were invited to the residence of Peter D. Smith, Esq. and partook of an abundant treat of cake & ice cream.
November 17, 1882 AA – Peter D. Smith has greatly improved the view from and to his residence on Elm Square, by cutting down several of the elms which have stood on the lawn.

Peter D. Smith would later sell to Jacob W. Barnard on April 14, 1891 and moved into the Smith family home on Shawsheen Road. Sept. 14, 1894 AT – pg.1 col. 5; “The bandstand which has stood many years in Elm Square has been removed by J. W. Barnard” This property remained with the Barnard-Lally Trust until 1986. The deed continued to include the “open common” land. The Town of Andover purchased the Elm Green from Richard W. Lally on May 30, 1986 for $10,000.
Nov. 18, 1910 AT - Elm Square Bandstand – editorial comment about building one in the square.
A new bandstand was later built in “The Park” in 1912 and continues to serve the town.

The green has also been used for Christmas tree lighting, a living Nativity Creche in the mid 1960s. Temporary billboards for a variety of fundraising campaigns during wartime and community outreach programs of the Red Cross, Red Feather and Community Trust foundations and Recycling schedules. The Town installed a Policeman’s control booth kiosk there in the early 1960s which remained until the Elm Green was constructed. The Elm Green park has now occupied the site for 23 years. ((2018).
Our flag still “thrown to the breeze” comes full circle from the fist pole erected here.

The Memorial Auditorium at our Town Offices building was dedicated in 1936 in memory of all who served and fought in World War I. A bronze plaque is on display in the main entrance foyer.