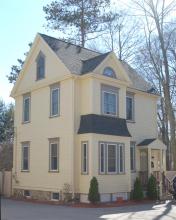 This land had a long association with the Ballard Family and is always referred to locally as Ballard land. Captain Joshua Ballard moved to Andover 1848. He was a timber trader and farmer, and bought property from Merrill Pettingill including a blacksmith shop which then came into possession of Jame H. Cochrane who had the adjoining property at #5 Punchard and to the corner of Bartlet St.
Captain Joshua Ballard from Ballardvale built a plain, substantial, moderate sized Greek Revival style house on this spot at the corner of Main St. and Punchard Ave. (once called Universalist Court).
July 24, 1885 pg. 3. col. 1 The Ballard family, it is understood, will soon build a fine residence on the site of their old house, at the corner of Main and Punchard Avenue. After Capt. Ballard's death, the house was moved to make room for the new one.
June 18, 1886 – Mrs. Ballard’s house on Main Street has been moved.
The Greek Revival house was moved to the south edge of the Ballard lot not 104 Main St.
Miss Mary Ballard's modern, handsome and elaborate Victorian house was built in 1886 which included an attached barn and carriage house. She and her sister remained in their home until death took them both. The property was sold and Caronel Apartments were built on the site of the Mary Ballard house. The house and barn were separated from each other. The Barn was moved to the SE corner of the the lot and the main house was turned 90 degrees and moved to the NE corner of the property. The remaining front lawn was used for the apartment building and open court. The building is the former carriage house and barn. It was converted into an apartment about 1924 and then a condo unit in 2000's