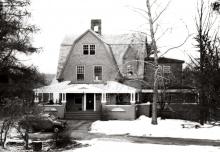 Architectural significance: Nice example of Shingle Stye home when built - however modern addition on south side detracts;
chimneys are interesting.

Nov. 12, 1897 AT – Thomas E. Allen, of the Monroe Paper Co., has bought a tract of land on Union Street, Frye Village and will build on it for his own occupancy. The tract comprises about two and a half acres and extends to the Shawsheen River. It adjoins the property of Walter S. Donald on the north and Donald’s ink factory on the south.

Mar. 25, 1898 p1 AT Work has commenced on the new house of Thomas Allen of Lawrence near the junction of North Main and Union Streets.