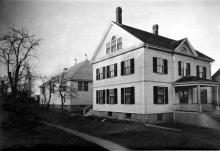 Circa 1908 - Andover Guild with new gymnasium (click to enlarge)

The Andover Guild, a local charitable organization, was organized 1896 for the purpose of providing a place for the youth of Andover to meet, socialize The Andover Townsman on Aug. 14, 1896 p.4 published a drawing of the new building to be built along with a description. On Dec. 18, 1896 New House of Andover Guild – opens on Brooks St.The Guild provided afternoon programs for children. Twelve years later a gymnasium was added to the rear of the house. It included a basketball court and a bowling alley in the basement. New Guild Gymnasium; Architect Perley F. Gilbert AT, 7 Feb 1908 - pg. 6 and 4, gives complete floor plans. Gymnasium Opened - 'Andover Townsman' 14 Feb 1908, pg. 4.

The girls and boys basketball teams from Punchard High School practiced and held games at the Guild before the construction of Memorial Auditorium and Gymnasium in 1936-37. The Guild also served in the summer June - September as an American Youth Hostel in 1938. Miss Katherine E. Walsh was the supervisor, and a committee Chairman Roy E. Hardy with Mrs. Carleton Kimball, Mrs. Cynthia Pike, Rev. Graham Baldwin and Mrs. Charles D. McDuffiee members in 1948.

The Guild organization provided social events, arts & crafts classes, sports programs, gymnastic classes and bowling.The Andover guild operated for 67 years. The membership dropped in the early 1960s and the Andover Youth Center was created by Fred H. Harrison, Pres. about 1963. The town selectmen had dialog with the Lawrence YMCA in 1967 about opening up a branch in Andover at this location. Young Men's Christian Association YMCA of Lawrence, MA purchased the property on Nov. 14, 1968. The Y programs were a great success and in a few years outgrew the space. The YMCA joined with North Andover to build a new facility on Haverhill St. in 1974.

The Andover Trust, Frederick W. Newcomb, Trustee purchased the building June 1, 1979. The empty building then was rented as a Marshal Arts school.

Augustine "Gus" P. Sheehy, an Andover native and developer, purchased the property on Dec. 28, 1984. Gus then created the 10 Brook Street, Andover Realty Trust with three a other partners. Gus was a member of St. Augustine's Parish and the Knights of Columbus and thought the church might want to use the building. The K of C had built a new a lodge in 1960 out on Frontage Rd. off Osgood St. in West Andover. Sheehey first offered the property to the church which declined due to renovation costs. Ultimately Sheehy would buy out his partners and arranged a swap, down payment for the West Andover lodge and the Knights of Columbus would get the Brook St. building.