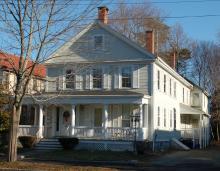 Historical significance:
This home was built by Merrill Pettengill in the Greek Revival style and was originally located at 98 Main St. near the corner of Punchard Ave. It was moved to the southern end of the lot in 1886 to make room for the Mary A. Ballard House on the same site. Mary Ballard's house and carriage house were also moved in 1923 to the east side of the lot and are now 1 Punchard Ave.

This land has long had an association with the Ballard Family and was referred to as Ballard land. Joshua Ballard was a timber trader and farmer and bought the property once owned by Merrill Pettengill. Pettengill purchased the lot from the Ministerial Fund of South Parish on Mar. 15, 1819. Pettengill, a blacksmith was born 1794 in Salem, NH, son of Asa & Esther Pettengill. He married Oct. 15, 1812 in Methuen to Alice How b. 1794 in Methuen. Merrill and Alice were living in the home in 1822 and most likely built the Greek revival home, previously thought to have been built by Joshua Ballard.

The property was deeded to Asa Pettengill, of New Orleans on May 20, 1837 for $5000 which included five parcels of land. Asa deeds to Sylvester Bowman for $3000 on Dec. 3, 1844. Bowman sells the Dwelling house parcel to Joshua Ballard on March 20, 1848. Ballard’s former homestead was on the Old Boston Rd. (now Woburn St.) near Foster’s Pond brook which he sold to John Marland.

July 24, 1885 Andover Advertiser pg. 3. col. 1, The Ballard family, it is understood, will soon build a fine residence on the site of their old house, at the corner of Main and Punchard Avenue.
June 18, 1886 A.A. – Mrs. Ballard’s house on Main Street has been moved.

Miss Mary Ballard's modern, handsome and elaborate Queen Anne Victorian house was built in 1886 which included an attached barn and carriage house. Mary A. lived in her new home until her death on Mar. 19, 1922 just five days shy of her 94 birthday. The census reveals Ellen A Collins, b. Nov. 1866 MA, servant remained in Mary’s service until the end. Other family members listed were a cousin Mary Cummings in 1880, nephew William H. Chandler age 64 in 1900 and Sarah (Fisk) Ballard Widow of Gayton in 1916-1918.

The estate was left to her grand-nephews Edward H. Chandler and Gayton B. Ellis, and Great-grandnephew William Y. Chandler who would sell the property on to Edith C. O'Connell & Blanche Carroll on June 8, 1923. The Caronel Court Apartments were built on the site of the Mary Ballard house at 98 Main Street in 1924. Mary’s home and barn were moved east to front on Punchard Ave at #1. The old Ballard house at 104 Main St was sold to Alice C Dean and her sister Caroline A. Dean in May of 1923.

The Ballard heirs sold this house to Alice C Dean and her sister Caroline A. Dean in May of 1923. The Deans father John Dean owned very successful men's clothing store at 46 Main Street. The Deans built a fine home at 77 Main Street which was moved in 1966 to the rear of the business block on that site. Caroline A. Dean was a local public school teacher and taught at Stowe and John Dove Schools. The Dean house was sold in 1903 when their father died to Charles E. Howland. The Dean family of three sisters and brother J. William then moved to the old Ballard house at 104 Main Street. The Deans rented this home before buying in 1923. After the death of Alice Dean on Feb. 5, 1938 age 67the house was sold by her brother George Dean Extr. of her estate to Ella Onasch and Wilhelmine I. Lehmann in July 1938. Onasch held the property for 35 years.

The house was then sold to James M. Garvey of Lawrence in May 1973. Dennis and Ruth Doherty purchased it in Sept. 1974 and held it for 10 years. John S. Dugger Jr. and wife Katherine R. Koob bought in May 1984. The Delisio family acquired the property in Aug. 1991 and it remains under the name of Delisio Family Realty Trust on April 2010.