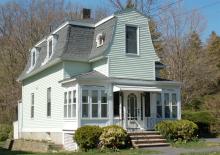 This home has two lives and histories, one at 31 Elm Street and the second at 104 Summer St. (formerly numbered 88 Summer). The house was first sited on the current lot of the Free Christian Church on Elm St. The Deacons of Free Church purchased the property from Jeanette Wiggin Kimball and her siblings Rubelle K. Kimball and Nellian G. Mayhew on April 4, 1903.

The original Free Church building was located on Railroad Street on the current site of the MBTA parking lot. The church congregation needed a larger building and began planning for a new structure. Once funds were raised the church began construction at the Elm St. location in 1907. The property however held two houses and a barn.

Feb. 22, 1907 Andover Townsman p1. The buildings of the Kimball estate on Elm Street will be sold at public auction on Saturday March 2, at 2:30 pm. The property consists of two houses and a barn and are owned by the Free Church Society. The term of the sale require the purchaser to move the buildings before April first so that work on the new church can be started at once. The sale will be held rain or shine.

March 29, 1907 AT pg. 1 The cottage house on the Free Church property on Elm Street, recently purchased by John E. Hutchenson is being moved to his land on Summer St.

John E. Hutcheson was born in January 1855 in Brechin, Scotland, son of Robert & Agnes (Ewing) Hutcheson of Brechin. John married Jane Bowman Buick of Arbroath, Co. Angus, Scotland and lived there at East Links in the1881 Scotland Census. John's occupation was Fish Dealer and Chimney Sweep. They would have 5 children; Georgina Forsyth b. 1875, John Ewen Jr. b. Feb. 1876, William Johnson b. May 1879, Robert b. 1881 and Elizabeth b. June 1883. John, known as Jock, wife Jane died leaving Jock to care for his children.

John immigrated to America in 1887 and settled in Andover first working at Smith & Dove Manufacturing Co. as a Flax Dresser. He re-married on Sept. 1, 1887 in Andover to Margaret Watt b. Nov. 15, 1861 in Arbroath, Scotland daughter of Albert Rose & Elizabeth (Wallace) Watt. They most likely knew each other in Scotland as they both immigrated the same year they married.
Margaret W. worked as an Operative.

John established his own fish market business in Andover and operated out of his property at 87 (#115) Summer Street. Smoked fish, a specialty, known as "Smokies" in Arbroath, Scotland, were fixed in a building behind his barn. Jock had a wagon and peddled his fish about town.

Daughter Margaret W. has married John D. Fairweather, and had two daughters Margaret A. b. 1913 and Ruth W. Fairweather b. 1915.
It is said that John Fairweather managed the fish market but that it did not last.

John deeded this property to his wife Margaret W. Hutcheson on Dec. 2, 1913. which included 2 adjoining lots. John E. Huthcheson died on April 3, 1933.
Margaret W. Hutcheson then held the property jointly with her daughter Margaret H. Fairweather on July 14, 1937. Margaret and her two daughters occupied the home. Her mother Margaret died on Oct. 22, 1940 in Lake Placid, FL. at age 78 y 11m. Both parents are interred at Spring Grove Cemetery.

David Holt Jr. and Isaac Osgood Jr., both of Andover, Traders. had a partnership Holt & Osgood. At some point the partnership was dissolved as all of David Holt’s estate was placed into a trust. Hobart Clark and later John Flint were appointed trustees and guardians by order of the court for David Holt, "Yeoman, was given to excessive drinking and idleness." Some of his property had to be sold off in 1829 and 1830 to raise $4050 to pay Holt’s debts.
The trust notes two brothers, Uriah Holt Esq. of Norway, Maine and Ephraim Holt of Greenfield, NH. In April of 1830 David Holt gives trustee John Flint, one undivided half of the property with the brick store. This was the 10th parcel in the deed of which the last two are owned in common with his wife Sarah Abbot Holt. David Holt died on October 3, 1836. Sarah A. Holt and heirs of David Holt, sell the “brick store near Merrill’s Tavern and next to land of Mark Newman excepting the small wooden building now occupied as a bookstore and not owned by me.”

Foster then sells the property to William S. Jenkins for $2010. on Oct. 10, 1874. William S. Jenkins is a carpenter and in partnership with George Abbott of Abbott & Jenkins. Jenkins home was at 118 Main Street. It seems likely that Jenkins added the second cottage home to the lot. The odd sliced off Mansard roof line in the front gable is a mystery. As it should be finished with the same treatment as the remaining roof, it could be that this home was once attached to a larger home near by, moved here and converted into the cottage. The 1882 Birds Eye view map of Andover Center shows both houses on the lot with the roof in this state.

Eldest daughter Jeanette W. Kimball now 32 administered the estate. Jeanette and sister Rubelle were living in Boston at the time of the sale to the Free Church in April 1903. Nellian G. had married Charles Mayhew and was living in Conway, NH.