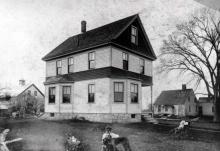 Circa 1912 - Collection of Andover Historical Society (click to enlarge)

The former Ebenezer Lovejoy homestead was located at 108 Lovejoy Road, the half Cape with an attached shed to the right in the period photo. The house was sited facing south. The Lovejoy Farm contained about 60 acres most on the west side of Lovejoy Rd. Some of the IRS parking lot and land behind Sanborn School were former pastures and woodland of the Lovejoy place. The old homestead was razed in 1984 for the new home on the lot next door.

Joseph Thompson Lovejoy married Georgianna Pettingill b. Sept. 1841 in Maine; Both were members of West Parish Church joining in July 1866. In April 1875 Joseph took a $700 mortgage with the Trustees of the Ministerial Fund of South Parish Church. This deed lists the unrecorded deeds and dates of the Ebenezer Lovejoy parcels. They had

Arthur’s father Joseph T. died on Feb. 22, 1923 age 82y 8m 16d. His mother Georgianna died on Feb. 10, 1929 age 82y 9m 21d. Both are interred at West Parish Garden Cemetery. Stephen Arthur Lovejoy inherits the Lovejoy farm and continues to hold the property another 20 years. Arthur is a dairy farmer in the census records. He sells off the old Lovejoy farm to John & Katherine A. S. Bolton on July 13, 1944.