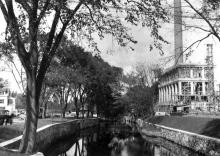 Colonial Revival style.
A utilitarian building that needed to function as a power plant, yet blend with the surrounding architecture and be aesthetically pleasing.
Concrete pillars, brick veneer, cornice banding to break up the height and large multi-panes steel framed windows created an extremely successful design.

Shawsheen Village was named after the Native American name for the river Shawshin, which means Great Spring. Prior to Shawsheen Village this area was known as Frye Village. All the streets in the new Village were named for Castles & Cathedrals in Great Britain. Tantallon Castle is a semi-ruined mid-14th-century fortress, located 3.1 miles east of North Berwick, in East Lothian, Scotland. It was a formidable stronghold that stands on a cliff overlooking the Firth of Forth. The last medieval curtain wall castle to be constructed in Scotland, it was the seat of the Douglas Earls of Angus, one of the most powerful baronial families in Scotland.

This Shawsheen Power Plant was built as part of the Shawsheen Village development from 1918-1924 by William M. Wood, President of the American Woolen Company. The former power plant was built to blend in with the surrounding businesses, the Shawsheen Dairy, Hardy Brush Company and the American Woolen Company Administration Building. The building was of concrete, with brick trim and had very large multi panned windows.

The following articles were published in the Andover Townsman.

AT - July 29, 1921 p. 8 - "Construction on Power Plant, Warehouse and Railroad Station Proceeding Rapidly Towards Completion"
New improvements are being continually added to the village. Huge cranes and giant shovels operate daily. One of the buildings being erected is a great power plant which will supply steam heat and electric lighting to the village. When the work is finished the plant will be the finest of its kind in this part of the country.
The plant has a shape much like the letter "T", with the frontage on the Shawsheen river of 123 feet, and a width in the rear of eighty-seven feet. It is 105 feet deep and will be seventy-five feet high.
The lofty, octagonal chimney measures thirty-six feet across and will be 225 feet high. It has a base of solid concrete. Twenty full car loads of keystone shaped bricks will be required to build the chimney.
From the power plant a mammoth tunnel, ten feet wide, fourteen deep and 700 feet long will conduct steam pipes and electric conduits to an immense new building which is now being constructed beside the tracks of the Boston and Maine Railroad. ......

AT - Aug. 12, 1921 "Central Heating Plant for Shawsheen Village" – Operations have begun on the cement foundations for the pipes from the oil tanks which are to supply fuel for the power plant designed to heat the warehouse, station, Manor, Post office building, Balmoral building and many of the houses.
There will be four tanks, each with a capacity of 125,000 gallons. These tanks are to be near the railroad track and not far from th South Lawrence line, and will be placed at a lower level than the railroad track so that they can easily be replenished from a car. An arrangement of steam pipes will keep the oil at a temperature which will cause it to flow freely at all times of the year.

AT - March 2, 1923 p.8 - Central Power Plant - Unit Furnishing Power, Light and Steam to Mills Is a Model of Efficiency - One of the most modern and efficient central power plants in the country is to found in Shawsheen Village. It is designed to furnish all services for the mills, warehouse, and dye house, including heating, lighting, power, and water supply, both hot and cold.

Situated on the east bank of the Shawsheen river just north of Haverhill street, it is included in that group of the more important buildings of the village, which have many points in common as to architecture. As a result, brickwork offset by concrete details, is a predominating feature of this power house as contrasted with concrete offset by brickwork in the mills. This gradual transition from the fine industrial design to highly artistic treatment is especially noteworthy.

The power house proper is a T-shaped building consisting of a main head-house facing on Tantalon road, and the river. It is 124 feet by 54 feet, and a stem, centrally located beyond the rear wall, is 69 feet long by 52 feet wide. The exterior structural members of the main boiler-house are of reinforced concrete veneered with high grade brick, and trimmings are of precast concrete instead of cut stone. The windows are of ample size to provide an abundance of natural light, and here, as in the mills, the rolled steel sash has been used to full advantage.
Equipment of this plant has received very thorough and careful consideration through-out, and the best features of up-to-date developments have been incorporated so far as they relate to the efficient, economical and reliable operation of the power plant proper and the different requirements of the mill.

Although Mexican fuel oil is used as fuel for the boilers, the plant is so designed that it can be readilly change to use coal if necessary. Located north of the present large storage warehouse and adjacent to the long railroad siding, are two vertical steel storage tanks each of 120,000 gallons capacity, for storing the fuel oil, with a provision for two more later on. Three tank cars on the siding can be unloaded at the same time into the present storage tanks. Under the brick house beside the power plant are two horizontal cylindrical service tanks of 15,000 gallons capacity which supply oil for the boilers. A rectangular concrete tunnel 1700 feet long contains the oil and steam lines connecting the service and the large oil storage tanks.

In a brick pump house located beside the storage tanks at the railroad siding, are two motor driven gear pumps, controlled by switches at the power house, for pumping the oil out of the larger tanks, and from the pumps it flows by gravity to the service tanks. Float operated switches automatically shut off the pumps when the smaller service tanks are full. Low pressure steam is used in a system of piping within the tanks and around the main oil line to keep the oil in the proper degree of fluidity at all seasons of the year. Oil from the service tanks is conducted to the burners at the boilers by a duplex system of reciprocating pumps.

At the present time there are installed and in operation two Heine Safety Water Tube Boilers each of 1000 Boiler Horse Power A.S.M.E. rating, and capable of 300 percent overload. The boiler room also has provision for two more boilers of the same capacity. Foster Ray type super-heaters are part of the equipment of each boiler. Steam is delivered at 200 pounds pressure with 100 degrees of super-heat, to operate the generators as well as reduced pressure steam for process work in the mills and for heating.

Each boiler has fifteen Dahl mechanical atomized burners which are very efficient in getting the greatest amount of heat from the oil, and are capable of forcing the boilers to their full capacity.
Feed water for the boilers is drawn from the Shawsheen river either by motor or steam driven house service pumps and forced through an open Cochrane feed-water heater and purifier. From here it is forced into the boilers by turbine driven four-stage centrifugal pumps.

Outside the boiler house is located a fine large brick stack of the most pleasing design. It is 250 feet high with an interior diameter of 16 feet at the base and 12 feet at the top resting securely on a massive base of solid concrete many feet deep.

In that part of the plant forming the stem of the T are located the large generators and their auxiliaries. At the present time the generator equipment consists of three units. A 3500 kilowatt General Electric extraction type, jet condenser turbine operated generator, and also one of 500 kilowatt capacity of the same type are the two main units. The third is a 100 kilowatt Westinghouse gear driven non-condensing generator. Two of the auxiliaries for these generators are a 35 K.W. General Electric steam exciter and a 35 K.W. Westinghouse motor driven exciter. These generators furnish alternating current of 3 phase, 60 cycles, at 550 volts. This electric current is used for operating the individual motors in the mills and also for providing light.

Above the generators is a large Maris 30-ton traveling crane. This crane is equipped with a hand-operated carriage, with a 30-ton motor-operated hoist, and also a five-ton hand-operated auxiliary hoist.

Centrifugal pumps in the basement of the power house furnish cold water service from the river and hot water is pumped from the hot well to the mill buildings.

This central plant furnishes all the heat for the ill buildings as well as the following principal buildings in the village: Both Garages, Post Office,
Balmoral Spa, Laundry, Creamery, Shawsheen Manor and annex, Voting booth, Administration building. Shawsheen Restaurant and annex, and the Brush Factory.

The Laundry, Creamery and the Manor are furnished with both high and low pressure steam. All steam lines for heating these buildings are conducted through concrete tunnels and piping is thoroughly insulated. One of the finest and neatest systems of pipe insulation is to be seen in this very up-to-date power plant.

It is not known at what time the plant closed down but it sat idle for many years. The windows were used a target practice by children and the chimney became unsafe. The chimney was demolished first in 1991. There was some hope that the building could be renovated into an office building. The extensive use of asbestos fireproof materials on the interior made it impossible to find a buyer and the building was razed. A photo in the Townsman May 16, 1991 shows a portion of the smoke stack being demolished.