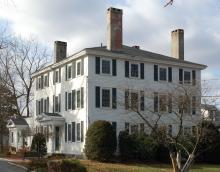 Historical significance:
On March 1, 1818, Major Daniel Cummings bought 7 acres from South Church. He had formerly lived in Ebenezer Jenkin's place in Scotland District, where he kept Merino sheep. He paid $700 to South Church, the money being turned into a Ministerial Fund of South Church. Cummings built a three-story Federal style house and boarded academy and theological students, 1820 - 1823. Cummings sold the property to Calvin Sanger for $4000 on June 2, 1824. Cummings moved to Vermont.
Calvin Sanger of Sherbourne, MA then sold to James Locke on October 27, 1824. James Locke had been the proprietor at Mansion House on the Hill 1817 - 1825. Then he moved down Main Street.
"Old Lanlord, Saturnine and grim/ Who left our hilltop for a new abode; and reared his signpost farther down the road/ " (Oliver Wendell Holmes).
From 1824 - 1846, during James Locke's tenure, Locke Tavern became a meeting place for new enterprises. Locke was a Free Mason and St. Mathew's Lodge was organized here in 1823. A group interested in organizing a branch line between Andover and the partially completed Boston and Lowell Railroad, held a public meeting here and resolved to partition legislature for a charter for Andover and Wilmington Railroad. The first meeting of the stockholders of the corporation of Andover National Bank was held here. The Merrimack Mutual Fire Insurance Company was organized here February 1828. Abbott Academy was founded at James Locke's Tavern Feb. 19, 1828.

The property was sold for $4680 to Nathan Wood Hazen, Esq. on Jan. 23, 1846. Hazen was a lawyer, member of the House of Representatives, and the house was probably not a tavern after Hazen's ownership. "Notes of Jacob Chickering, Builder, 1874, October : N. W. Hazen, fence about 220; cost 75 cents per foot - the digging not included. (North Andover Historical Society).

Squire Hazen was born July 9, 1799 in Bridgeton, Maine, son of Jacob & Hannah (Wood) Hazen originally from Boxford, MA. Hazen married Oct. 21, 1831 to Mary Pingree dau. of Asa & Anne (Perkins) Pingree of Salem, MA. They had one daughter Mary P. b. 1839 in Maine. She became a school teacher in Andover. The 1860 and 1870 census reveal only a few boarders in their home. Nathan Hazen died March 20, 1887 and the first issue of "Andover Townsman" announced "Capt. Locke's Tavern for sale: three stories; 13 sleeping chambers". It was bought by Mrs. John Flint, (Frances A.) who sold to William Goldsmith. In 1888, John Flint remodeled, removing ell buildings and two sheds and moving the barn to rear of 117 Main Street. The L on North was moved to run East and West. Flint changed windows to large panes and he sold out lots along Locke Street.

On Oct. 14, 1889, Albert Manning, who owned Smith - Manning Dry Goods Store, 8 Essex Street, acquired the property in exchange with Mrs. John Flint for property on High Street. Dr. Clark then owned and occupied the house and about 1928, he sold to Mrs.Katherine M. Pinckney on Dec. 20, 1915 who kept it as a boarding house unto 1942. Katherine P. Whistler inherits the property on Jan 14, 1943 by Will

Frederick E. Cheever became the owner on Oct. 10, 1946. Cheever, 1946-1971, who was in charge of apartments there after 1946. Andrew and Dorothy Innes were owners 1971-1976.
Joseph A. Grasso became the owner on Jan. 9, 1976 and held the property for 26 years. It was then sold to E. Paul & Andrea J. Long, and converted into the Locke Tavern Condominiums in Aug. 28, 2002. An addition on the west side was altered during the conversion. Hardy board clapboards replace the original wooden ones.