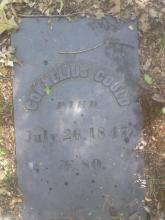 This family burial ground is just 15 feet wide and 34 feet deep. It was once enclosed by four wrought iron Victorian posts linked together by chain swags. Stone posts mark the east boundry and the lot sits 13' north of a stone wall boundary on the south and abuts a stonewall to the west along Central St. in North Reading and Gould Rd. in Andover.

The Gould family cemetery is located just over the town boundary line in North Reading on Central Street. It was originally part the Cornelius Gould farm at 102 Gould Road in Andover which extended across the line into the North Parish of Reading, MA. The North Parish became North Reading in 1854. The town boundries were surveyed on December 1 - 4 of 1902 and redrawn in May 1903. The North Reading boundary was moved north at this location and the property is now included in the County of Middlesex.

In the summer of 1988 the Andover Historical Society and the Andover Preservation Commission conducted a survey under the title "Andover Historic Cemeteries Project" lead by Joan Patrakis. All the cemeteries in Andover, included family owned burial grounds were inventoried. The plan was to capture and document as many of the old inscriptions before lost in erosion to acid rain and natural deterioration. At this time the Gould Cemetery was measured, photographed and documented.

The following description was done by Leo Greene in 2009, the owner of the former Gould homestead at 102 Gould Road, Andover, MA.

Cornelius died on July 26, 1847 and was buried on the farm in a small family plot on the Andover and North Reading line.

The proximity of the burial ground to the Gould Farmhouse leaves little doubt that the stones mark the graves of the family that once lived at the Gould Farmhouse. This conclusion is supported by multiple other pieces of evidence. In the cartographic record, a “C. Gould” is listed on the Moses Dorman Map of Andover (1830) as living on what is today known as Gould Road, slightly to the east of where the road turns to the southwest. The chain of title for the property also supports this conclusion. In his last will and testament, recorded July 23, 1840, after leaving cash distributions to six of his seven children, Cornelius bequeaths “to my son Henry Augustus Gould the residue of my estate, whether real, personal or mixed” Then, in the Walling Map of Andover of 1852, an “H.A. Gould” is listed as living in the same house. Further, the genealogical record lends credence to both the dating of Lydia and Cornelius, and the fact that they had a son named Henry Augustus Gould, and a grandson named Milo H. Gould, all of whom turned up in the chain of title for the property. Thus, the following family reconstruction/historical narrative was written using individuals whose dates matched that of the grave stones as a starting point, namely Cornelius Gould, and his wife Lydia Jenkins Gould.
Narrative

The area in which the Gould Farmhouse sits was, at the time of its construction known as the Scotland District. Robert Russell, a Scottish immigrant settled in the area and because of this fact the district received its name.