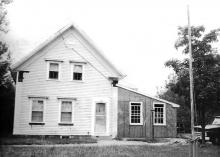 This house was built in the Greek Revival style popular between 1820-1860. The period photos show the home with the original engaged pilaster corner boards and deep eave returns. A side porch was added in the 1970s and the home now has a front porch across the main with of the facade.

The property was once owned by James Toye who purchased three separate parcels of land. The first parcel was acquired form the guardian of Lucy A. Bailey on Apr. 11, 1867. This lot contained a little over 7 acres of land and included the current house lot. It was located on the road from the North District Schoolhouse to the Shattuck Farm or River Road. Two other parcels were also purchased by Toye. The second parcel in the deed on Dec. 6, 1865 from Daniel Lovejoy. No mention of size but went down to the Merrimack River. The third parcel was purchased from Amos C. Morse and contained 8 acres. The Toye farm would have abutted the Rufas Bailey farm once located at 87 River Rd. and razed in the 1981, the land now occupied by Campanelli Drive.

A few months later the property was transferred to George Jacobson's wife Rose. The Jacobson family would own the property for 41 years. George Jacobson was a farmer. In 1943 George & Rose are listed with two children, Jacob a laborer and Peter J., with wife Irene. Peter is a 2nd Lieutenant with the US Army. Son Jacob Jacobson and his wife Armenouhie acquired the property through the will of Rose Jacobson. In 1961 Jacobson divided up the property and the homestead lot was parceled off.The parcel map #4384 shows the house on River Rd. at a corner of a small road labeled Chestnut Lane. The parcel now included only 44,000 square feet. Jacob built a new home next door at #91 River. Rd. Jacob was a police officer for the Town of Andover.