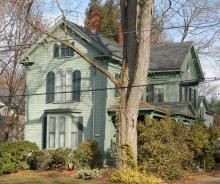 Historical significance:
Andover Advertiser: July 24, 1858: "William Jenkins is building a house on the main road to North Reading, a short distance from his present residence. It is two stories high, with an L 1 1/2 story, shed attached - William Steward Jenkins, builder."

William S. Jenkins built the house and stable, later the home of his widow Rebecca and daughter Kate. The house has 11 rooms and four bedrooms and is in the Italianate Style. William Jenkins was a business partner with master builder George Abbott in Abbott & Jenkins, builders and contractors located on Essex & Pearson Streets.

The Jenkins family held ownership to the property from 1858-1961. William also purchased the John Derby house next door at #118 Main St. in Dec. 1883. That home was used as rental income property. After the death of business partner George Abbott, Jenkins sold his business to Hardy & Cole and retired.

William S. Jenkins died on April 19, 1900. [see William S. Jenkins obit. Apr. 20, 1900 Andover Townsman - long history of his life as a builder] Their daughter Ella Stuart (Jenkins) Smith inherits the property with the condition that her mother Rebecca maintains life tenancy which she did until her death on Jan. 23, 1917. The Jenkins are interred at South Parish Cemetery.

Ella was married to B. Franklin Smith the son of Peter Smith of the Smith & Dove Manufacturing Co. They lived at #65 Central St. Ella Smith died on Oct. 7, 1943 and in her will gives the property to her sister Kate P. Jenkins who also had “life tenancy” in the deed but if she should die the property would then go to Ella's son Stuart J. Smith. Kate outlived her nephew Stuart who died April 18, 1945. Kate died on Aug. 5, 1960 and her estate was probated on Feb. 21, 1961 doc. #265902. Halbert W. Dow was the executor of her estate. He sold this property to C. Lincoln Giles in April 1961.

The house at #118 went to niece Susanna Smith Purdon and her husband Frank L. Purdon. They now owned her father's house #65 Central St. The Purdons held the property for about 1 1/2 years before selling to C. Lincoln Giles on Feb. 12, 1962 thus ending the Jenkins-Smith connection to the property. The Jenkins family are interred in South Church Cemetery. Four families have owned the property since Giles sold in November 1961. The Smith family are interred in West Parish Cemetery.