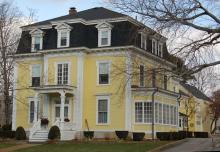 The property is distinguished historically as the site of the First Methodist Episcopal Church of Andover from 1829 - 1841 and also for the first meeting in 1889 “to discuss the desirability of a Woman’s Club in Andover for social and literary advantages,” soon realized as the November Club.

126 Main – French Empire – Cutter – Handy House - Site of Methodist Church 1845
This property was once owned by the Andover South Parish Ministerial Fund in 1810 which extended from Punchard Ave to Wheeler Ave. Lots were created and sold off at auction on April 19, 1810. This parcel appears to be a portion of lot #4.

On May 10, 1830 Daniel Saunders, a Manufacturer, Parker Richardson, Blacksmith and Martial Shearman, Watchmaker purchased this lot for $325 the purpose of building a church. The newly established First Church Methodist Episcopal of Andover in 1829 was the fourth church to be built in the South Parish. Daniel Saunders was one of seven trustees. The property was held in Trust with the Rev. Nathan Rufus Spaulding on April 9, 1832. The trustees were Saunders, Richardson and Orlando Abbot, Charles Abbot, Charles F. Abbot, Samuel B. Hutchinson and Salmon H. Higgins. The trustees were charges to build a meeting house. Trustees had to be a member of the church for at least one year prior to being elected and 21 years of age to serve.

The church was constructed on the site by 1832. “The church was supplied with preachers by the New England Conference; not having, during a large part of the time, a resident pastor. It had a feeble and struggling existence, and about 1840 was disbanded.” The last minister was Rev. Zachariah A. Mudge (1840-1841). No image or description of the building has been located but we assume that it was in the Greek Revival style and may have resembled the Universalist Church building on the corner of Main St and Punchard Ave. built in 1838. (#94 Main). In 1845 John Smith, president of the Smith, Dove & Co. purchased the vacant building and moved it to Railroad Street. The former M.E. Church was transformed into a Gothic Revival building and served as the first Free Christian Church until 1908.

The vacant lot was purchased by Thomas C. Foster for $600 on March 6, 1849. Foster sold to Willard Pike in 1852 who owned a soap factory on Morton Street. Pike held for 11 yers then selling to Mathew Culley on October 14, 1863. Culley then transferred the property to the Rev. Ambrose A. Mullen, Order of St. Augustine’s of Lawrence, MA. The Roman Catholic Church was established in Andover in 1852 and their first church was constructed on Central St. Augustinian Society of Lawrence held the property on June 28, 1870.

Local painter and builder William Wood purchased the lot on Oct. 28, 1879. It would be Wood who built the French Empire style home on the site. Andover Advertiser Oct. 10, 1879 – “William Wood will build on his eligible lot on Main Street, a two story Mansard roof house, 36 by 39 feet with an L 20 by 30 feet, pitch roof. Wood work not yet contracted for. Jones of South Lawrence furnishes the under-pining.
Dec. 12, 1879 AA – William Wood’s new home on Main Street is up and being pushed forward by J. H. Jennings of Hampton, NH…”
Jan. 2, 1880 AA – Alonzo Stewart fell inside the new house of William Wood on Thursday, into the cellar, a distance of fifteen feet. He was considerably bruised, no bones broken.
June 18, 1880 – Work has resumed on the new house of William Wood on Main Street. Moody Russell has contracted to finish it.
Mar. 24, 1882 AA – William Wood has sold his house and land on Main street to Mrs. Emma J. Cutter of Somerville.
April 7, 1882 AA – The Cutter family of Somerville, have removed to the house on Main St. which they recently purchased, and William Wood has taken a tenement in the house of J.W. Barnard on High Street.

William Wood was born in 1835 in Ireland, son of John & Margaret (Choate or Chitic) Wood. William came to Andover from Danvers as a young boy and became a painter. He married Nov. 21, 1865 by the Rector of Christ Church to Margaret McDermott born in March 1843 in Scotland, daughter of Robert & Amelia McDermott. William & Margaret had four children, three survived to adulthood; William W. b. 1867, Walter E. b. 1874 and Marion Leighton b. Jan. 13, 1876. Wood later built a home at 66 Park St. in 1883 and developed a large portion of Florence Street.

Widow Abby R. Handy and daughter Elizabeth L. Handy purchased the home on Dec. 29, 1887. Abby Rolfe (Lumbert) Handy was born Aug. 1829 in Maine, dau. of Col. Joseph & Elizabeth (Alley) Lumbert. Abby married on Feb. 14, 1854 in Bangor, ME to John Nelson Handy b. Apr. 3, 1815 in Portsmouth, NH, son of Samuel Clarke & Ann (Nelson) Handy. John was a Lumber Merchant. They had one daughter Lizzie b. June 4, 1856. John was first married to Mary Ann Mathes of Durham, NH, and had three children form that union.
John died in North Andover on Dec. 24, 1884. Abby owned the home for 15 years and had boarders in the home. In 1900 Abby and Lizzie are boarding with Carroll C. & Feronia Carpenter at 26 Bartlet St. Her home now income property.

The 1910 Census lists Edwin age 71, a Grain Dealer, Matilda Sweetser age 80 sister-in-law, Sarah MacKeowan b. Sept. 1861 age 49, a boarder, b. Nova Scotia, a Milliner in Lawrence and Mary E. McAllister 22 b. in New Brunswick, Canada, housekeeper. Edwin died on July 11, 1918 in Andover and Mitilda on Oct. 15, 1919. Edwin had one brother Walter Scott Pierce b. 1841 who lived in San Francisco at the time of Edwin’s death.
Edwin left the property to Sarah Mackeown in his will with a life tenancy.

The property remains a nine unit apartment house to this day, owned since 1956 by the Abate family and now the Abate Realty Trust, which also includes 132 Main St. and two properties behind on Morton St.