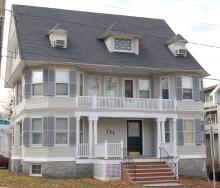 Site of Willard Pike's Soap Works (ca. 1845-1852)
This building was built in 1892 in the Shingle Style by Ovid Chapman as a new fraternity Secret Society rooming house for boys attending Phillips Academy. Prior to construction Chapman moved the former smaller fraternity PAE House "PI Alpha Epsilon" he had built on this lot in the early 1880’s to his back lot now #123½ Main St. The Society was founded in the late 1870's as a literary society as a reward of merit. "Dr. Bancroft used the society as an experiment which led to his philosophical change from "elimination" to "regulation" . The Society remained here until 1908 when it built their own brick PAE House now "Cooley House on Main Street

July 8, 1892 AT - "O. Chapman intends making alterations in his property on the corner of Main and Morton Streets. The club house directly on the corner is to be moved to the Hazen lot in the rear of the tennis court, and a new one built in its place."
July 22, 1892 AT "The club house belonging to O. Chapman, at the corner of Main & Morton Streets, has been moved to the rear of his store building. It was moved by Geo. Wilson last Friday (July 15) night, as it was necessary to wait until the electric cars had stopped running in order to cut the wires and get the building around them. Work on the new house on the corner is already underway. Hardy & Cole having the contract to build it.

The clapboard on the first floor and cedar shingles used on the second floor and roof gable ends create visual texture. The cut stone foundation, dentil work on the porch cornice carried through and around the bays break up the mass of the facade and give a grand high style to this apartment building. The rounded roof dormers and center window treatment add interest to the roof line, break up the mass and allow light into the third floor space. Deep overhanging eaves create a floating porch roof for the front and south side porches. Bracketed corbel gables on each end punctuate the multiple rows of windows in the attic space and create an architectural awing from the elements. The roof dormers once were capped with ornamental copper spires.

Today this house contains three apartment units building, has 15 rooms and has been used as rental income property.