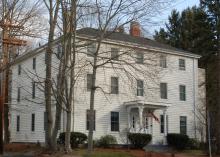 Historical significance: The property along the east side of Main St. from Punchard Ave. to Wheeler Ave. was owned by the Andover South Parish Ministerial Fund prior to 1810. Seven lots were divided up along the new Essex Turnpike and sold off at auction on April 18, 1810. This parcel lot #3 was purchased by Isaac Abbott for $625 which also included Lot #2 to the south. A strip of land two rods wide was set off between lots #3 (134 Main St.) and #4 (#126-132 Main St.) which is now Morton St. (formerly known as Pike St. and Greene St.)

This lot of land was purchased by Amos Blanchard, Esquire, from Isaac Abbott. Blanchard built his home at 97 Main St. in 1819, now the Andover Historical Society. Amos Blanchard hired John Brown, carpenter and housewright of New Hampshire to build his home. John Brown purchased this lot from Blanchard on June 25, 1821 for $330. Brown had borrowed the funds from the Ministerial Fund of South Parish to pay for the lot of land. John Brown then built the Federal Style home on this lot. Brown and wife Cynthia owned the property for six years then sold the property to Samuel Valpey, gentleman and Merrill Pettengill, blacksmith for $2600. on Oct. 27, 1827. Brown built other homes in Andover before moving to Bangor, Maine. The following month the property was then purchased by Rev. Aaron Greene.

"Andover Advertiser July 23, 1853, an article on Octogenarians, briefly tells of the Rev. Aaron Green. He was then 87 years old. He remembered the battles of Bunker Hill and of Lexington" [CHA]

Morton St. was once called Green Street for Rev. Green, later called Pike St. after Willard Pike and then Morton Street after Judge Marcus Morton. Rev. Green is said to have added the third story to the Federal Style house creating additional bedrooms for boarders.

Nathan was a Painter by trade and had relocated to Andover by 1850 as he is listed in the Federal Census. They lived in a large house as they had sixteen boarders, 7 boys age 16-25 attending Phillips Academy and 7 Girls ages 15-24 and 2 women, there is no notations given as to what the girls occupations were. By 1860 Ellis is listed as a Shoe Manufacturer. His wife Susan was a Boarding Housekeeper. Daughters Elizabeth is a servant, Maria H. a music teacher and Ellen G. just 16 had no occupation. Only three boarders are listed in the house with them; Almira Ellis age 59 from Maine a servant. She may have been related to Nathan. Johanna Farley age 23 and Margaret Buckley age 25 both servants from Ireland.

Ellis may have rented the house prior to owning but in 1870 he has eighteen boarders living in the house along with his wife and two daughters. 15 boys were enrolled at Phillips Academy and hailed from; Mass. 5, NY 3, Illinois 2, Ohio 2, Virginia 1, Wisconsin 1, Maine 1, and one from Ireland. Three women Hannah M. Holbrook age 58 was boarding, Hannah Driscoll 19, from Ireland servant, and Emeline Rawdall age 19 from Ohio listed as a student at Phillips Academy. As the academy only enrolled boys it may be in error. Emeline may have been at Abbot Academy or the Female Academy held in a private home next door at 148 Main. St.

Ellen sold the property and house to George A. Stewart in Nov. 1927. One portion of the property had been sold off to Bertha S. Bradford in 1919.

George A. & Irene Stewart had been living on Holt Rd. and move here with their two children Lucy C. b. 1904 and Alexander b. 1909. George was born in NH in 1873 and married in 1903 Irene A. b, 1874 in Kentucky. George was a cashier in a wholesale beef company but later opened his own grocery store at 8 Essex St. in the former Smith & Manning store. By 1940 George had retired. Their daughter Lucy was a book keeper for Old Colony Trust Bank in Boston. Son Alexander became a Commissioner for the U.S. Labor Department. The Stewarts continue with the boarding house tradition of the house renting rooms to adults and had from five to seven boarders living there in 1930-1940.

"A Better Chance Inc." ABC and refurbished as a dormitory, with quarters for resident director's family. This organization is aimed at offering qualified minority students the same educational opportunities and academic future as students have in an affluent suburb with high educational standards. The program was established through Dartmouth College and Andover was one of the first communities to adopt the program. The students live here and attend Andover High School, taking part in school and community affairs with host families. The first program semester began in September 1967 and was all male students. The program was changed to the an all female students program. House was remodeled in 1977 in order to accommodate the girls elected for ABC program.