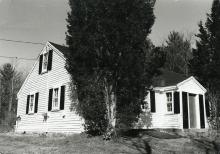 Charles Allen Taber & wife Evelyn Attwill Taber of Boston purchased in Jan. 1888. Edward M. Smith then purchased the property 9 months later on Sept. 1888. Smith held the property for two years then selling on May 15, 1890 to Mary K. Brown, wife of Edward Brown. One condition of sale was to "paint and whitewash the dwelling house." The Brown family owned the property until 1957. Mary K. Brown died on Feb. 2, 1927. A will devised in April 1901 the property was to go to her son Waldo Brown. She had three children; Edward, Waldo and Katherine. It took some time to settle her estate as Waldo had predeceased her. The property eventually was inherited by her grandson Harold I. Brown, son of Edward Brown. Harold signed an affidavit on Oct. 10, 1946 stating he was the only child of Edward. Katherine Brown Keach quit claimed the property and Harold and wife Leonora L. Brown became the owners.

The property was sold in 2014 and the plan of the new owners was to restore the house. Upon gutting the interior of the home, dry-rot and powder-post beetle damage uncovered in the structural posts and beams made the house unsafe and it was razed in September 2014. A new home of similar design is to be built on the old footprint.