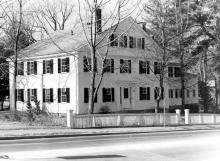 Circa 1960 - Collection of Andover Historical Society (click to enlarge)

In 1850, it was a book and stationery store kept by Mr. Pierce who also lived here. . Residence of Edward Farwell.

At the north corner of Main and School Streets in a portion of the vacant triangle and nearly directly across from Wheeler Street the “Cheever House” once stood. [Main Street or Essex Turnpike laid out 1806 -1810].

This parcel of land was once owned by David Holt who sold it to David Pearson, Yeoman, wife Sarah W. on Apr. 21, 1829. David Sewall Pearson was born Nov. 7, 1789, son of Dr. Abiel & Mary “Polly (Adams) Pearson. David married Sarah Wildes of Charlestown, intention recorded on Oct. 21, 1820. Pearson had the house built and the contract for construction of the house was filed with the Essex County Registry of Deeds in Salem in 1829 in book 255 leaf 6.

David Pearson signed an agreement with Nathaniel Whittier and Jacob Chickering on June 9, 1829 to…… “build and completely finish on or before the first of October next, on the lot of land between the turnpike and the old road and near the house of Miss Mary Griffin in said Andover, a building of wood, 36 ft. long by 27 ft. wide and 17 ft. posts., board, shingle and clapboarded the same…. To put in 22 windows of 9”x12” glass of 12 panes, 2 windows 8”x10” glass of 12 panes, two outside doors, finished the first story of said building, two rooms, front entry and front stairs to be finished with clear stuff, one room and chamber, stairs with cellar stairs and chamber bedroom to be finished in merchantable stuff, to make 6 six panel doors and 4 four panel doors and hung the same, with handles & latches, to lath the mentioned rooms ready for plastering… Except the glass and glazing of the windows, which is at Pearson’s expense. To pay Whittier & Chickering $200 when the contract is signed, $290 on July 25th and $250 on Dec. 1, next. Signed June 9, 1829.
The deed was amended on July 27, 1829 and included additional work….to finish the front entry in the second story and also the chamber on the South side facing the old road (School St.) finished in merchantable stuff, lathed for plastering, also make 4 six paneled doors, handles and latches for $57, also build two porches over the outside doors mentioned in the contract for $54, a wood house 24 ft. long and 12 ft. wide to be boarded and shingled, one half to be finished for a well room, by a partition from the wood house, a floor, two windows and three butting doors to be made and hung….for the sum of $90 and agrees to pay additional $201 to Whittier and Chickering – signed Sept. 8, 1929 and the final payment on Dec. 1,

David Pearson financed a portion of this with a mortgage loan of $500 from Jonathan Clement who had built his home across from Pearson’s lot at 12 School St. David would sell the property on Jan. 11, 1834 to William Peirce of Boston, Bookseller, for $3200. Peirce took a loan from Rev. Leonard Woods for that sum. Wood held the mortgage deed for six years then assigned it to the Massachusetts Congregational Charitable Society Trustees (MCCS) on July 2, 1840 for $2000. Pierce got behind on his loan and the Society trustees took possession of the house on July 13, 1844. It has been stated that in 1850 it was a book and stationery store kept by Mr. Pierce who also lived here. The MCCS held the property until July 13, 1847 when the mortgage was assigned to Henry G. Gray of Andover, wife Lydia S, for $2399.66. The 1850 Andover Valuation lists Henry Gray’s extensive property holdings including Peirce House valued at $2800. Gray sold the property to The Trustees of Phillips Academy on Sept. 23, 1853.

The 1870 Census lists two nieces Lilla G. age 10 and Alice B. Cheever age 3 both daughters of her son Horace. Alice may have attended school here as she is here in 1880 with two boarders Mary A. Thompson age 55 an artist, and Hannah Brown then age 84. Daughters Sarah & Ella help with the running of the house and Mary B. Hawks 55 is a domestic servant.

Betsy L. Cheever died on Oct. 19, 1886 and her daughters Sarah S. and Ella T. Cheever step into the role of Head of the house. Betsy Cheever’s funeral service was reported in the Andover Advertiser on Oct. 29, p. 3 …..the funeral was arranged by Mr. Edward Taylor at her home were Prof. John Phelps Taylor did the service and Rev. C. F. P. Bancroft at graveside. Bearers were neighbors, Rev. W. L. Ropes, Rev. C.C. Carpenter, Mr. M.S. McCurdy, Lieut. Commander Strong USN, Prof D. Y. Comstock and Prof. E.Y. Hincks, D.D. Singing from a quartet of male voices from the theological seminary was led by Mr. E. H. Chandler. Flowers sent in by friends and by the students in Mrs. Cheever’s family were singularly beautiful. She is interred in Ridgewood Cemetery in North Andover.

Sarah S. Cheever died on Nov. 30, 1896 and Ella T. then ran the boarding house. In 1900 Minnie S. Cheever, a niece, b. Mar. 1864 and niece Alice B. Benson b. Jan. 1868 and grandniece Amy F. Steele b. Jan 1896 age 4 have joined Aunt Ella T. in the household. Six boys are boarding in the home and three Irish servants; a cook, waitress and chamber maid help with the domestic duties. By 1920 Ella, now 74, and niece Minnie S. Cheever age 55 and one servant Annie McGrath are the permanent residents.
Ella T. Cheever died in 1923. Minnie S. Cheever would move home back to Haverhill and lived with her mother then out to Los Angeles, CA in 1930 to live with her sister Alice B. [Benson] Bradey a widow. The Cheever family had occupied the boarding house for 70 years.

In the 1926 Andover directory John & Mary Crocker reside in the Cheever house. John is an instructor at Phillips Academy. The home remained faculty housing and dorm for the students at Phillips Academy through the 1970’s. The house was slated to be torn down, condemned as dorm as structurally unsafe, but faculty members fought to save it. Deemed to costly to renovate, sadly the old landmark came down on August 27th & 28th 1981.