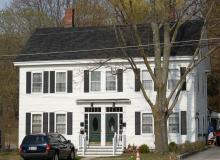 This property was once thought to be mill housing for the Marland Manufacturing Co. but a recent deed search has revealed a different ownership lineage. The property was once a portion of the Joseph L. Low estate who built his home at 70 North Main St. at the corner of Lewis. His farm estate included all the land now occupied by the Town Yard, Lewis St. & Buxton Ct., and this parcel down to Harding St. Joseph Low sold off this lot to Erastus Gile on Oct. 30, 1850.
Gile was a brick mason. Gile and B. F. Thompson a house-wright are attributed in the deeds as the builders of the duplex home.

North side;
B. F. Thompson owned this side of the house for seven years. It appears that Thompson did not live her but used it and income property. The 1855 Mass. State census lists Rev. Caleb E. Fisher age 40 as living here. Fisher was the 4th pastor of the new Free Church, then located on Railroad St., Fisher was the pastor from June 1, 1855 - May 4, 1859. Rev. Fisher, wife Mary, and children, Francis E., John M., Mary E. and Catherine, most likely lived here until the Free Church Parsonage was built next to the church.

The next owner was Hannah Graham on July 14, 1884. Graham owned until her death at which time the property was inherited by her daughter, Emily E. (Graham) Barton. Emily held the property then sold to Cornelius F. Howe on April 29, 1930. With the purchase by Howe the entire house and property was united under one owner.

The home is similar in design to the Harding House at 6-8 Harding St. which is listed individually on the National Register. This home may have originally had the same front facade tongue and groove boarding with clapboards on the sides and rear. The front entrance is slightly modified but retains that classic Greek Revival styling.