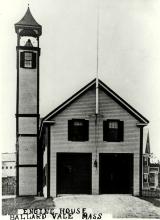 This firehouse is actually the first and second firehouses to be built in Ballardvale Center by the town of Andover. The first firehouse was built in 1871 and opened in January 1872 on the east side of Andover Street. The lot of land measuring 25' x 40' backed up to the Boston & Maine Railroad tracks nearly opposite the Ballardvale Depot and across from the old Ballardvale Schoolhouse.

The Ballardvale District Firehouse was built to house horse drawn fire wagons. Andover Advertiser - Oct. 10, 1879 - "A new bell is to be purchased for the steamer engine house and the one now in use is to be placed in the new bell tower of the engine house, Ballardvale."
The firehouse served the Vale in that location for 24 years and then was moved from the original site to the current location in 1896 at the corner of Andover St. and Clark Rd. The old station with its tower was placed to the rear of the lot and a new addition to the side facing the intersection, reported to be 30 x 40. The bell and hose tower was extended to 67 feet at that time. The hose tower was used to dry the hoses after a fire. The tower was removed in the 1950s.

The first parcel of land was purchased from the B & M Railroad on Sept. 16, 1871, Francis Cogswell, President of the company.

A portion of the deed reads: ....." tract of land in said Andover on the northerly side of a piece of land of said Railroad which lies between the tracks of said Companies railroad immediately north of the Depot at Ballardvale and the traveled road lead from the said Depot to the old Ballard House, for the purpose of erecting thereon a building in which to keep a fire engine. ... The parcel of land between the above tract here in conveyed and the highway, which is about twenty five feet long and eight feet wide is not to be covered by said building or otherwise encumbered, but to be thrown open to the public. The said tract is to be sufficiently fenced by said town as to protect the remainder of said corporations land for ingress or egress of Cattle. This deed is given upon the express condition that neither the land nor the building there on is to be used for any other purpose than to keep there a Fire Engine to be used in case of fire."

The engine house was built on the lot and completed in January 1872. The front portion of the current Ballardvale Station is 25' x 40' suggesting that section is the original firehouse built in 1871. The rear portion of the station is 26' x 35' and was most likely the addition which also included the bell and hose tower on the west side. The portion of land that was 8' x 25' was a passageway that allowed residents direct access to the train Depot to the rear.

The Andover Advertiser Jan. 26, 1872 Ballardvale - "Another new and much needed piece of property has been added to the estate of the town.
The engine house located here, which has just received its finishing touches, and been accepted by the Selectmen, was dedicated with appropriated ceremonies of Friday evening last. Among the invited guest present, were John Flint, Esq., Chairman of the Board of Selectmen, Hon. Geo. Foster, Rev. Mr. Green and others. Shawsheen Engine Company, Capt. Stark, who are to occupy the building, were all present in uniform. The Mill Engine Company, Capt. Butterworth, and the steamer's officers and men of the South Parish were also present. The brass band discoursed some fine music, speeches were made by the Rev. Mr. Green and the Hon. Geo. Foster, a few pieces were sung by a trio of male voices, a collection was served in the engine room, and everything seemed to flow in a cheerful and merry strain: good humor and jollity reigned entire. Those whose fancy led them, repaired to Hat Factory Hall, where in, "light, tripping measure," an hour or two was spent quite sociably; everything passed off in a quiet and orderly manner."

Sept. 18, 1885 Andover Advertiser - BV - The Ballard Vale Band have removed from their old quarters on Andover Street, to the hall of the Ballard Vale Engine house.

July 12, 1889 AT Ballardvale - The J. P. Bradlee No. 2 was out for trial last evening and as usual worked to perfection. This machine runs as well as the day it was bought and has never had a cents worth of repair. It will always be a monument to the good judgment of those who bought it.

April 24, 1896 – AT p. 5 Ballardvale – The engine house was moved on the new lot last Monday in a very expeditious and satisfactory manner. After the contemplated repairs are made the building will present a much improved appearance, and will give our fireman increased facilities for a prompt and speedy answer to all alarm calls.

Aug. 27, 1897 – AT P1. Ballardvale engine house, struck by lightning Sunday, is being repaired by Hardy & Cole as ordered by Mr. Smart on behalf of the insurance companies.

Mar. 25, 1898 AT - The board of engineers has voted to give the work of repairing the Ballardvale engine house to Hardy & Cole. The plastering will be done by Ross.

Mar. 25, 1898 - P5 Ballardvale- The work on repairs and improvements on the J. P. Bradlee Engine House are being rapidly pushed along. Hardy & Cole are doing the carpentry work and Ralph Ross is doing the plastering.

May 20, 1898 AT - p.5. Ballardvale - The repairs of the Engine house are practically completed and it would amply repay any citizen of the village to inspect the new quarters of the J. P. Bradlee Hose Co. The hose tower has been sheathed, cellar floor cemented, the meeting room has been overhauled, the woodwork being varnished, the walls re-papered, and the ceiling whitewashed, and the outside of the building has been given a coat of paint. A large part of the money has been laid out on finishing the hall which now presents a very inviting appearance. The walls for about 3 feet high are sheathed with a hard wood finish and an A1 birch floor has been laid. A large plate glass mirror, furnished by the company, will adorn the front of the hall. It is brightly lighted by three clusters of three electric lights each. The work has all been done by Andover parties, except the concreting. Hardy & Cole doing the carpenter work, Ralph A. Ross the plastering and cementing, E. J. Rowe the painting and Mark Chase the concreting outside the building. The firemen are quite jubilant over their new quarters and will give a dance and entertainment to their friends this evening.

The old Fire Station was replaced with a new one built on the lot directly behind in 2021. It was decommissioned in September and razed on October 12, 2021.