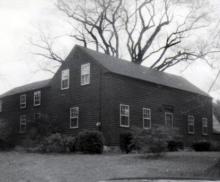 This property was the site of the former Isaac Blunt house that was razed in late 2003 for the sub-division and development of the former farm by the North Andover Realty Corporation. A review of the historic property was done by the Andover Preservation Commission in 2003 with a Demolition Delay imposed on the house. The property structures were photographed in October 2003. The house was late razed for the new home now on the site.

A structure indicated on property as early as 1755 according to deeds; Mrs. Mabel Josselyn Sellers purchased the property in 1896. Her daughters, Grace Myatt and Ruth Hooper, have lived here since 1965. --corrections by James Sellers, 1981