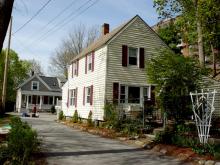 Abbott Village was established early in the 1800's with an more than adequate source of water to power the mills. Abel & Paschal Abbott moved their wool mill operation here from North Parish about 1813 and had a successful business until about 1838 when the market turned. The mill buildings were sold to Smith & Dove Manufacturing Co. in 1843. The flax to linen thread company was established in Frye Village in 1835 (Shawsheen Village) and relocated up river to this location.

This home was most likely built as a home for mill a worker and his family. The house is listed on the 1852 Map and the 1850 Andover Valuation with a Thomas Donnefon [sic] dwelling house and land $250. In 1860 Thomas Donovan house Abbott Village $450. The property was conveyed by Patrick Donovan to Jane Close on Dec. 18, 1895. After Close died, a public administrator Nathaniel C. Rankin settled the estate and the property was sold to Smith & Dove Manufacturing Co. on Dec. 6, 1918.

Smith & Dove recognized the need for operative housing and slowly acquired several homes in the immediate area. They also built quality housing for their working force at 62-84 Essex St. and the double homes on Brechin Terrace. Every home on Baker Lane was once owned by Smith & Dove. The company reorganized and incorporated in 1864 and again in 1912 bringing all their properties together into one deed.

William H. Skinner conveyed all rights on Baker Lane to John Smith, President of Smith & Dove Co. on May 18, 1850. It was the first of eight properties acquired by the company on the lane between 1850 and 1918.

In 1927 the Smith & Dove Co. was sold to the Ludlow Co. The housing real estate was placed in the Smith & Dove Tenements, Inc. that year, changing the name to Andover Homes, Inc. that were then sold off into private hands. The company operations were moved to Ludlow, MA and the mill closed in 1928.

The McGibbons held the home for two years selling to Richard H. Wallace in Aug. 1961. He then sold to Alexander & Dorothy (Boynes) McGibbon on Nov. 1, 1963. Alex McGibbon was the son of Charles & Annebelle (Raymond) McGibbon. He was a Veteran and truck driver. Alex died at 70 years on Nov. 6, 1985. Dorothy inherits the property and places the property into the Baker Lane Realty Trust in Mar. 1998 with her and Dorothy DiGloria as trustees. Dorothy McGibbon died in July 10 1998. They are both interred in Methuen.

Dorothy DiGloria the surviving trustee sold the McGibbon estate to Glenn Ippolito of the Bouyant Realty Trust on Dec. 11, 1998.