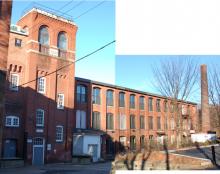 As early as 1682 this area of Andover was being offered by the Town Proprietors as a “Mill privilege on the Shawshin, near Roger’s brook” to any inhabitant willing to build a saw mill. In 1753 one half of a saw mill was sold by Humphrey Holt to Asa Abbot and then in 1764 to Nathan Abbot.

Abbott Village was established early in the 1800's with the more than adequate source of water to power the mills. Abel & Paschal Abbott moved their wool mill operation here from the North Parish about 1815. Abiel Russell was their first foreman and Daniel Saunders leased a portion from 1817-1825. James Howarth established a wool mill 1824-1847, building the stone mill on the east side of the river. The Abbot brothers had a successful business until about 1838 when the market took a down turn. Creditors sold the Abbot Mill buildings to Smith & Dove Co. in 1843.

Smith & Dove Co. produced linen thread and was established in Frye Village (Shawsheen Village) in 1835. The company founders John Smith, Peter Smith and John Dove were all Scottish immigrants from Brechin in County Angus. The company continued operations in both Frye and Abbott Villages gradually relocating all production up river to this location in 1895. In 1865 they became the Smith & Dove Manufacturing Co. Inc. producing linen thread for shoe laces, carpets and sail cloth. Later operations included some broad cloth. Smith & Dove claimed to be the first linen production manufacturer in the United States.

This Main Mill Building replaced the original monitor roofed structure that stood on the the site. The first brick building was constructed in 1866.
AA - July 20, 1866 - Smith & Dove building new factory in Abbott Village – The new brick factory of Messrs. Smith & Dove Co. at Abbott Village is progressing rapidly. It is 95 x 50 feet and is to be 3 stories. The stone foundation is a very substantial piece of work. The masons work is all done by Messrs. Gleason & Morse. The gentlemen manufacture the bricks from a machine procured from England and they are considered greatly superior to those made in molds. The foundation for the engine-house has been laid near the main building. The wood work is done by Messrs. Abbott & Clement. The machinery now running in the old wooden building on the west side of the river will be removed to the new factory when it is completed, and the manufacturing will all be done in the brick and stone mills.

Dec. 21, 1866 Festival at Andover – Celebration of John Smith 50th Anniversary of his landing in the United States – 700 people attended – long article of the event.
“The hall in which the entertainment was prepared was in the third story of the new mill recently completed by the company and was well adapted for the purpose. It was about fifty feet in width and one hundred in length and was tastefully trimmed with evergreen and otherwise decorated under the direction of Mr. Jackson Dawson.”

The original mill building was in operation from 1866 - 1894. July 20, 1894 AT p. 1 – Extensive Alterations – To Be Made at the Smith & Dove Plant – The stockholders of the Smith & Dove M’ft. Co. took an important step this week when they decided to consolidate their Frye Village and Abbott Village works in one plant in Abbott Village. Their plan in the rough is to build a new brick mill three stories high, extending from the present brick structure to the Howarth land. A building for the bleachery, dyeing and drying departments will be erected on the opposite side of the river where the old wooden mill now stands. The work for making these alterations will begin immediately, and it is expected they will be completed this present season.

Aug. 10, 1894 – Abbott Village – The saw mill, an old landmark to many resident of the town, was
demolished this week in the course of improvements on the mill. It has been there for the greater part of a
century.

Sept 21, 1894 p. 1 A staging for the brick masons at the new Smith & Dove mill gave way Monday and
some of the men received a severe shaking up.

Feb. 1, 1895 p. 4 Abbott Village – Work is rapidly pushed on the remainder of the new mill, the first floor
being already laid.

It is not known if the old factory was incorporated into the new mill structure, as other buildings in the complex were altered and enlarged or razed for the new mill building in 1894. .

The Smiths and Dove families were active in community affairs, contributors to educational institutions and helped establish Memorial Hall Library. They were all abolitionists, with John Smith and John Dove charter members of the Free Christian Church, which John Smith established. It would be the second generation of the Smith & Dove families that expanded the Abbott Village mill buildings to meet the needs of the 20th century. Worker housing, a village hall, recreational facilities and a pension fund were all established to help their operatives.

In 1927 the Smith & Dove Co. was sold to the Trustees of the Ludlow Manufacturing Associates of Ludlow, MA. The housing real estate was placed in the Smith & Dove Tenements, Inc. that year, changing the name to Andover Homes, Inc. that then sold off the housing stock for individual ownership. The company operations were moved to Ludlow, MA and the mill closed in 1928.

The Indian Ridge Co.,Inc. acquired the mill properties and some of the housing stock. Through the company treasurer Virgil D. Harrington the mill buildings were then parceled off sold to private investors.

The Old Mill #1 and the Preparing Building #17 was sold to Hattie V. Stephenson on May 9, 1936. In 1936 the mill was used as storage of New and old textile machinery. The front "Batch House" was rented to the Colonial Spinning Mill. Stephenson leased out floors to a variety of companies. In May 1937 Hattie purchased the old Engine & Boiler plant at the NE end of the building. It powered the mill complex when the Smith & Dove CO. was in operation. In May 1950 Stephenson sells the property to Jack G. Berman who is partners with Benjamin Berman and Robert G. Goldman. With the death of Jack Berman new partners took ownership in June 1957, Robert G. Goldman, Erwin R. Kaufman and Ziegfried Kellerman.

See Form A for Abbot Village