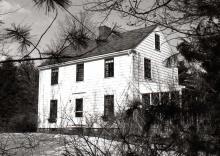 The property was sold in 1913 to Grace E. Merrick from Addie E. Howarth and contained 10 acres extending from Shawsheen Road to Lowell Street. The Merricks sub divided the property into smaller parcels and house lots. When Grace died intestate the property was inherited by Lathrop B. & Barbara H. Merrick.

Merrick would sell this house and 1.15 acres to Wolfgang & Ruth Berthold of Englewood, NJ on Jan. 25, 1954. In 1981 Ruth sold the home to her daughter Kay Berthold and husband Michael Frishman. Kay became sole owner in June 1991 and later created the 179 Shawsheen Realty Trust, and Kay as trustee in March 2003. On May 29, 2005 the home left the Berthold family after 41 years being sold to Andrew J. Poleszak and Jeffrey S. Burrows.