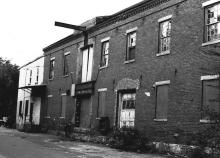 This building was once part of the Ballard Vale Mills Co. complex and is listed on maps as the Storehouse B building. A 1918 map of the mill complex shows this building use was for wool storage on the second floor and attic. The first floor marked a storage of gasses. The building was nearly identical to building A across the street at 19 Dale St.

The Ballard Vale Mills Co. sold their complex to Marshall I. Stone of Newton, MA on Feb. 21, 1928. The company held the mortgage loan. A default on the loan in 1943 forced a taking of the property and the mortgage deed was then sold to Helen A. Kendall, wife of Warren C. Kendall, of Washington DC. on Aug. 12, 1943. The property contain several mill buildings on 21.73 acres of land on both sides of the Shawsheen River.

The building has served several purposes through the years. In 1981 the Andover Beverage Barn moved to this building when the old Ballardvale Community Center on Andover St. was razed by the town. (now part of the Ballardvale Green) Robert Wilton was the owner of the business and sold both soda, tonic, beer and liquor. The second floor was rented out to a group of Andover artists who used the space as a studio and held life drawing classes there on certain evenings.

Thre had been hope that when the building was sold to the Ballardvale Crossing, LLC for a Condominium development that the building would be converted into condo apartments. The building was found to be structurally unsound and was later razed. The current condominium building #18 occupies the same site and was phase one of the larger project. The new building is a nod to the style of the former building B. The identical building to the south occupies the site of two former wooden tenement homes.