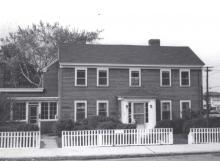 Abraham Marland established a cotton mill in 1807 on the Shawsheen River at Abbott Village, which continued until 1811 when he began production of woolen goods. In 1821 “Marland leased from Peter C. Brooks of Boston a mill privilege on the Shawsheen, together with new buildings erected on the site of what had been a powder mill. This area is now known as Marland Village. The buildings, which were leased for a term of twenty years, comprised a brick mill, the oldest of the present buildings at Artia Marland Place, and a row of brick tenement houses.” Abraham Marland built his homestead estate at 29-33 Shawsheen Rd.

In 1828 Marland bought the entire property, his purchased including the mill privilege, old paper and grist mills, and thirty acres of Land. In 1834 the business was organized under the name Marland Manufacturing Company. Abraham Marland was the president until his death on Feb. 20, 1849.
Nathan Frye succeeded Marland as the company president from 1849-1879.

The company defaulted on an 1873 loan from the Andover Savings Bank and the mill was sold at auction to Moses T. Stevens on North Andover in 1879. Stevens began improvements at the mill in 1884 relocating the road, building a causeway across the mill pond, a new bridge, and additional operative housing on North Main Street and Stevens Street.

August 8, 1884 Andover Advertiser, pg. 2 col 7 –
“For several years past the Marland factory has been undergoing changes and improvements, and the erection of new tenement houses, store houses, and other convenient buildings, until it has become one of the neatest and tidiest factory villages in New England.
Passing down Main street towards Frye Village, the attention of the traveler is attracted to the snowy whiteness of the tenement blocks, on the left hand of the great thoroughfare, each having a beautifully embellished flower patch in the front yard. Everything in and about the buildings betokening good taste and much painstaking. But we did not intend so much to notice what has been done, as what is now doing, and the new departure has been entered upon.
This time a new avenue from Main street to Marland street (Stevens St. today), on the west side of the river, about 150 feet south of the dam. This will make a saving of the distance traveled of 250 feet.
The plans were made by Richard A. Hale, Civil engineer of Lawrence. Excavating and building of stone flume, by Henry Keniston of North Andover. Millwork and Piling by James P. Butterfield of Andover. Stone from Lawrence Ledge, furnished by Jessie Moulton. Dimensions of bridge, 40 feet long, 22 feet wide, with 5 foot sidewalk on one side. Made by Boston Iron Bridge Company, Plate Girder Bridge.
Whole length of bridge and roadway is 280 feet. Roadway across pond 30 feet wide; 390 feet from Marland street, near turnpike, to proposed roadway across pond; 1500 perch of stone, and 1200 yards of filling required. The walls of the bridge at the bottom are 5½ feet thick, at the top 3½ feet thick, 14 feet high.”

Stevens Street was formerly known as Marland Street prior to 1904. This street is an ancient way in Andover and predates Main Street, originally called the “Essex Turnpike”, constructed in 1806-1811. Before the Main Street construction, travelers went down School Street to Central Street to Elm Square, then turned down Essex Street to Shawsheen Rd., then down Stevens Street passing through the Marland Mill complex, (Atria Marland Place entrance and driveway), then turning right across the bridge on to Harding Street which then extended through the parking lot behind Powder Mill Square to the North Main Street intersection. Turning left on No. Main and across Stimpson’s Bridge to Poor Street which once began at the site of the Christian Scientist Church and traveled north to the Andover Bridge at the Great Dam in Lawrence.

In 1953 the J. P. Stevens Co. divested itself of all its housing stock in Marland Village which was then subdivided into separate parcels and sold to public residents. Approval of the subdivision plans #2619 and #2020 by the Andover Board of Appeals occurred in Nov. 1952. All the properties on North Main Street were sold to private parties in 1953.

This house is earlier than other North Main Street mid-19th century mill housing. It is assumed to have been part of large purchase by Abraham Marland, backed by Peter C. Brooks in 1820 or built soon afterwards by Marland. Sold as lot #9 as a 2 1/2 story frame dwelling house to Horace J. Hilton, Ethel L., L. Doris and Elizabeth M. Hilton, all as Joint tenants, on March 4, 1953 for $5500.

The Hilton family had a long association with the Marland Mill and this house. In 1913 Andover Directory Joseph Hilton and his wife Bertha were living at 28 Stevens Street with James Hilton and Sarah. Joseph was a dresser at the Marland Mill, James & Sarah were employed at Tyer Rubber Co. By 1916 the family had moved into #188 No. Main Street. In 1918 Gertrude and Herman J. are list as operators at the mill, James H. is enlisted in the US Army during WWI and Sarah as an operator. The 1929 Directory has Joseph, Bertha, James H., carder, Herman J. dresser, Alice G. spooler, Ethel L. mender, at Marland and Lidia D. fore, at Tyer Rubber Co. This house had been their home for at least 37 years when it reached the market. One would guess by the number of tenants that purchased their rented homes, that the Stevens Co. must have given them first right of refusal to purchase the homes.

The Hiltons finally sold to Frederick W. & Mary Elizabeth Bradley on Feb. 5, 1964. Bradley was a Realtor in Andover. The property was placed into the Rittenhouse Realty Trust, Fred & Mary Bradley, trustees ten years later on Oct. 30, 1974.

A portion of the house was used by Christian Real Estate for many years and the apartment was rented out. The last tenants were a retired couple James K. & Mildred Sparks in 1990-1991. The house is listed as vacant after 1991.
There were several plans that were made public about the property and adjoining lots. The Townsman, May 8, 1997 "House slated for demolition may date to 1600s". reported that Walgreen Drug Store was interested in the corner location. Even the Town considered the lot as a possible for a new Firehouse. Both plans never materialized.

The property was acquired by the Wood Ayer Andover East Limited Partnership in Jan. 1984 when J. P. Stevens sold the remaining Mill property.

Powder Mill Square, LLC. purchased the property in 2004 and developed plans for the condominium complex. The house was razed in 2004 as were the four smaller houses to the north.