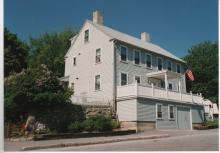 This house is of Federal style built circa 1835 as a side by side duplex - 2 front doors with two hallways, leading to 2nd floors and 2 more leading to the attic. Originally had 8 fireplaces which had been bricked in when central heating was installed. Two of them had beehive ovens - still in good condition. There are still 5 fireplaces exposed with their original mantels restored as are all the window casings and doors. The original front porch has been replaced, and the double doors have been replaced with one door, which serves all three apartments. The duplex is now (1998) a three apartment house. The house is built into a bank close to the sidewalk. (3 baths, 2 half baths, 10 rooms, 4 bedrooms.)

The Ballardvale Machine Shop Corp., John Marland, President, purchased much of the property in the center of Ballardvale in 1847. The land was then sub-divided into house and store lots and the company began selling off parcels in 1848. John Marland and John Howe Jr. owned the parcel along Centre St. (now Center St.) and auctioned off 35 lots on July 28. 1847. The auctioneers were Loring, Abbott and Porter of Boston.

The Ballardvale Machine shop would begin selling off their holdings in 1848. Samuel Abbott of Boston and William Abbott of Andover followed suit with their property on Oak and Tewksbury Streets. The greater portion of the village center was developed at this period of time.

In the 1880 census widow Lucy E. 73 is keep house. Her two daughters Julia M 39 and Mary F. 35 are both teachers. Sister-in-law Amanda P. Browne now 81 also resides with them. Amanda died on May 29, 1888 and Lucy on Oct. 4, 1891. Julia began her teaching career at the Holt District School on Salem St. in 1871-1873. She then taught the intermediate group at Ballardvale Center school from 1873-1878. Mary F. began at Ballardvale Center School in 1871 teaching the primary grades. She taught for a few years at the (Abbott) Village District School on Cuba Street but returned to Ballardvale and finished out her career at Bradlee School in 1896.

It appears that the property was inherited by Julia M. & Mary E. Browne as they are assessed on the home in 1920. Julia died on Sept. 29, 1924 and Mary on Aug. 8, 1932. All the Browne family are interred at Spring Grove Cemetery. The headstone spelling is Browne although the deeds and census list as Brown.

Joseph & Lucy's daughter Marcella Browne married Francis C. Kelly, "a carriage maker, who worked in Ballard Vale when the Machine Shop was used for that purpose." They later lived in Newton, MA. Marcella & Francis had two sons Edward P. and Arthur W. Kelly. Arthur Kelly, a grandson in this family, sold the property on 31 Dec 1981 to the present owners, Robert and Janice Henderson.

"The house was originally a side by side duplex... 2 front doors (a front entry was added between 1890 and 1900), 2 hallways, 2 stairways leading to the 2nd floor and 2 more leading to the attics. In 1981 the house had not been occupied for several years; it had been damaged, patched, vandalized and a small fire in one side... a very sad looking old house"

Starting in January 1982 the house was gutted to the studs and reconfigured to accommodate three apartments. The front porch vestibule was removed in August of that year. The house was converted into condominiums in 2005.