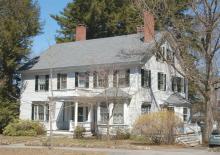 Edward Buck was born in New York City on Oct. 13, 1814. He attended Harvard and Yale, becoming a lawyer, with his office in Boston. Edward married on June 8, 1841 in Boston to Elizabeth Greene Hubbard, b. Feb. 11, 1817 Boston, MA, daughter of Samuel & Mary A. (Greene) Hubbard. Edward placed his property into a Trust for Eliza, with her father Samuel Hubbard the Trustee. The Trustees were changed to James S. Amory and Charles Amory when Edward purchased the Andover property.

Alice Buck was the moving force to save the "Indian Ridge" property from development as a sand pit, and preserve it as open space as a passive recreational area for townspeople. Now part of AVIS Reservations in town, a memorial plaque to Alice Buck's efforts was placed atop the ridge off Red Spring Road. Alice died on March 29, 1907 in Andover. Her brother Walter then inherited the home. Walter died twenty years later on March 7, 1927 and his widow inherited the estate. Mary died on Feb. 16, 1946 and was interred in the Buck family lot at the Phillips Academy Cemetery. The Buck family had owned the property for 93 years. William H. Eaton was the Executor of Mary W. Buck's estate and the property was then sold to Charles D. & Katherine S. McDuffie on Sept. 4, 1946.

Charles McDuffie died on Dec. 20, 1964 and widow Katherine S. McDuffie and Charles H. McDuffie, both Conservators of the estate sold the property to the Trustees of Abbot Academy on Jan. 1, 1966. The house was then named the McDuffie House by the Academy. With the merger of Abbot & Phillips Academies on June 2, 1973 the property deeds were transferred over to the Trustees of Phillips Academy on June 30, 1973.