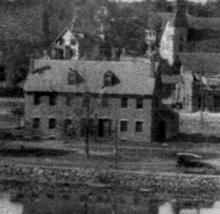 On this site was once a large brick boarding house owned by the Ballardvale Mills Co. and used for housing for their operatives. The parcel was sold by the Ballardvale Mills Co. by then President, Ralph R. French and son Ralph Jr. the company treasurer. Marshall I. Stone of Newton, MA purchased the parcel with buildings on Feb. 27, 1928. The lot was larger and extended down Andover and Dale Streets. It appears that Stone built the service station at the corner of Andover and Dale Streets. Stone held the property but sub-divided off the current 1/4 acre on Nov. 24, 1939 and sold it to Ethel Wilson, wife of John M. Wilson of Andover. This parcel is listed as 202 Andover Street.

It is not yet known when the brick boarding house was razed, sometime between 1928 & 1934. We do know that the service station was originally Texaco Oil. Local artist Howard Ames Coon painted a subject of the Shawsheen River in Ballardvale in 1934. Clearly seen in the background is the red Texaco star logo above the roofs.

Ethel Wilson's name was on the deed but the proprietor of Wilson's Service Station was her husband John H. Wilson. John & Ethel are listed at 347 Andover Street in 1943.
They sold the property on October 13, 1943 to Lusia Barberian. Lusia was the wife of Daniel Barberian, who was in trucking. They were living out in West Andover on Pleasant St. at that time. Berbarian held the property for 19 years then selling to the Valley Oil Co., of Haverhill, MA on July 24, 1962. The company owned the station business for 22 years. The assessors office lists the concrete block building as built in 1969. The former wood frame station was replace by a better fireproof building. Valley Oil Co. had relocated to Seabrook, NH by the time Carl Pescosolido, the president of the company sold to William A. Miller on April 5, 1984.

William A. Miller ran his automotive repair service and inspection station here until his retirement. It is not known at what time that they stopped gasoline sales and removed the pumps. The building has sat vacant for the past few years.