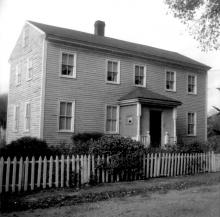 James Howarth was born on Nov. 25, 1783 in Rochdale, Lancaster, England. He married Dorotha “Dolly” Stott b. Feb. 17, 1783 in Rochdale dua. Of Austin & Elizabeth (Holt) Stott. James and family immigrated to America in 1818 and settled in Andover, MA. They had five children at born in England; Ellen b. 1807, Mary H. b. 1808, John Jr. b. 1811, James b. 1814, and Thomas b. 1816. In England the Howarth family had long been associated with the textile industry. Both James and his brother Isaac were weavers and both came to Andover. Howarth established a woolen company in Abbott Village in 1824 under the name “John Howarth & Co.” The old stone mill was built by the Howarth family. James became a naturalized US citizen on Sept. 19, 1828. James died just four years later on Sept. 1, 1832 age 49. His sons and wife Dolly carried on the family business.

The partnership dissolved in 1837- The Salem Gazette, Oct. 27, 1837 – Ad. Section – “Partnership Dissolved – The partnership between the Subscribers, heretofore existing under the firm of John Howarth & Co. is this day dissolved by mutual consent. The affairs of the firm will be settled by James Howarth who alone is authorized to receive payment of the debts due, or to become due to the said concern. John Howarth, Dorothy Howarth, James Howarth – Andover, Sept. 8, 1837. 6w.”

There was a down turn in the market about this same period of time when they dissolved the partnership. The Abbott Brothers Mill, located near the Howarth Mill, was a victim to the recession and their mill was sold by creditors in 1843 to Smith, Dove & Co. linen thread producers in Frye Village, Andover. Smith & Dove would later purchase the Howarth Mill in 1847.

Dr. James Howarth was a much respected and loved physician in town. His home was located on the east side of the Shawsheen River on a 10 acre flat plateau, above the Howarth Mill. A 1852 map of Andover lists Howarth Est. suggesting that the home may have been built by his father James. His mother Dorothy lived with her son James the remainder of her life. The property extended to the river on the west and to the Boston and Main Railroad tracks to the east. The southern end of the property bordered Fish Brook and the Cricket Field. The house was sited with a commanding view of the mill pond below and his father’s mill.

James died on May 13, 1884 and was interred in the South Parish Church cemetery. His wife Sarah continued to live out her days in the old homestead. On Aug. 4, 1885 Sarah sold off a portion of her land to the Smith & Dove Manufacturing Co. The piece of land included a right of way for Sarah to pass into her property. This would be later known as Howarth Court which began on Essex St. opposite Bakers Lane and lead up past the old Brick Block to the house.

Sarah (Towne) Howarth died on Nov. 4, 1898. Son Oberlin who had lived on the estate with his mother sold the remaining 8 acre parcel and the Howarth Homestead to Smith & Dove on Jan. 10, 1900.
The property was then used to build a new mill building #5 in 1905. The house remained in its original location for many years and was used as an office building for Smith & Dove. It was later moved about 1918 to 18 Baker Lane.

Of James and Sarah Howarth’s children; son Austin died a few months after his birth.
James Marcus, known as Marcus, held a few different jobs in his short life. He gave his occupation as Broom Maker when he married Christina Cargan on Nov. 30, 1863. He was a machinist, farm laborer and worked for the railroad where his life ended while working laborer at age 32 on Aug. 21, 1875. His wife Christina b. in 1841, in Lowell, MA, dau. of Owen & Ann Cargan, sadly died prior to Marcus.

Oberlin lived in the home with his family, parents, and grandmother Dolly. His father James died on May 13, 1884, his wife Mary Jane on Apr. 12, 1887 and his mother Sarah on Nov. 4, 1898. Oberlin would be the last Howarth to occupy the house. He moved to his daughter’s home on High St. Mary had married John E. Smith and had six children. Sadly Mary died in 1903.

Oberlin’s obituary in the Andover Townsman by Charlotte Helen Abbott – Jan. 1914 –
"Oberlin B. Howarth, an old time resident of Andover, a G.A.R. veteran and member of Post 99, G.A.R., and well known here for the last 50 years as a semi-professional doctor and nurse, died on Tuesday, January 20 at the Soldier’s Home in Chelsea, where he had been an inmate for the past two years. Death was due to a fractured skull, caused by a fall which he received a few days previous.
Mr. Howarth was born on August 14, 1830, and was the son of “Old Doctor Howarth,” known and remembered by so many Andover people. His early life was passed in the family homestead near the river, which was bought some twenty years ago by the Smith & Dove M’f’g. Company. From his father who possessed an unusual of skill as a doctor and herb specialist, he inherited a love of medicine and by the exercise of this, together with his work as a carpenter, he gained his livelihood. He served through the Civil War, and many were the stories of his experiences during wartime which he was wont to relate. He also served the town at one time as chief of police. After the death of his wife he made his home with his daughter, Mrs. John E. Smith, until she passed away. He then took up quarters in the Draper block where he lived alone until his health began to fail and he went too Chelsea. The funeral was held on January 22 and burial was in Forest Dale Cemetery Chelsea.

Oberlin Howarth’s father, Dr. James Howarth, was born in Rochdale, Lancashire, and came here with his parents and other relatives to weave blankets and wool stuffs. When we knew the family best, Oberlin and his surviving brother, Marcus, lived in the fine old farmhouse, back of the Smith & Dove mill, owned by his father for many years, and where both his parents died. Oberlin was born August 14, 1839. He attended the Center school with his brother. He had many gifts, was on both sides the inheritor of fine nursing, and had a good knowledge in surgical emergencies. He was a born mechanic and always ready to help out in times of need.
His mother was Miss Sarah F. F. Towne of Greenfield, N.H., of the old Andover line, a most capable manager of the old homestead. His father a gifted physician. Mr. Howarth took up late in life the best work of his career, that of nursing and massage treatment. He also made up from his father’s recipes valuable medicines for physicians. His war record was from July 5, 1861 to July 8, 1864, Co. H, First Heavy Artillery, and life would not be dull in his company, as he had a gift for a good story.

There is so little time that I cannot without more notes give any data of his family, but I can say that he had many friends both of his parents and of his own circle, who will regret his going, and recall his many kindly services, much of which was of the unpaid kind we all exact of a good giver, and such never get the substantial reward in solid lucre. But in memories of his old mates and those of his father’s friends his work will linger.
A more extended account of the Lancashire line will be given at a later date. C.H.A."

One, Two & Three Dundee Park were built in stages by the Smith & Dove Manufacturing Company (1835-1927) and these buildings are all sited on the original property once owned by the Howarth families.