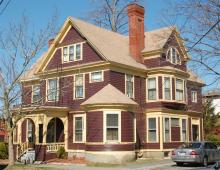 The corner lot at 94 Main Street was purchased by the heirs of Henry H. Abbott on April 26, 1879 for $900 the deed recorded on May 10, 1879. In June 1879 the former Grammar School building that stood on the property was moved to Bancroft Road. Henry Abbott’s children; Charles H., Frederic M., Catherine F. Abbott & Helen A. Ingersoll all then living out of State in Illinois, Ohio, and New York sold the corner lot, which had remained empty for eight years, to Dr. James Forsaith Richards for $1450 in April 1887.

Dr. Richards was born in Plainville, MA on July 18, 1832, the son of Jason & Sophia Forsaith Richards. James came from a family of ministers of which three uncles had graduated from the Andover Theological Seminary. Dr. Richards graduated from the College of Physicians & Surgeons New York in 1859. He opened his practice in North Bridgewater (now Brockton) in 1859 – 1871. Dr. Richards spent two years in Europe before moving to Andover in 1873. He built a home at 9 Chestnut Street. James married Ellen Augusta Brown of Lawrence on June 2, 1875. They had two children, Marcia Starr and James Austin.

On February 23, 1888 the Richards family occupied this house. Feb. 24, 1888 AA – Dr J. F. Richards moved yesterday into his new residence on the corner of Main St. and Punchard Avenue. The house is not a showy one, but designed and built with great taste and thoroughness. It has entrances on both streets, the Doctor’s office being at the left of the Main St. entrance. The internal arrangements and appointments of the house, which were planned largely by Dr. Richards, are remarkably commodious and pleasant. Merrill & Cutler of Lowell (the latter an Andover boy) were the architects and Brainard Cummings, the contractor. Napoleon Dubord, who has done so much honest and solid stone work in Andover, laid the foundations, E. Gile did the mason work, Albert W. Caldwell was the painter. The house is heated by steam and furnished with hot and cold water in both stories.

Dr. Richards’s children; Marcia S. graduated from Abbot Academy in 1896 taught briefly in our public schools before her marriage to Dr. Albert I. Mackintosh in 1905. Son James Austin Richards attended Phillips Academy 1896, Harvard University 1900 and Union Theological Seminary in NY. Rev. James A. was ordained at South Church in May 1904. and later became minister of the First Congregational Church in Oberlin, Ohio.

Dr. Richards was a member of South Church and a Deacon for 27 years. He taught Sunday school, was a Prudential Committee member. He had remarkable mechanical skills, and loved puzzles that required mathematical insight and ingenious handiwork. He was well read in Latin, Greek and Hebrew as well as Wordsworth and Browning. He was a most beloved physician in Andover. Dr. Richards died on May 13, 1903. His wife Anna H. sold the house in 1921 to Margaret & Frances Carey and moved to North Andover to Dr. Joseph Kittredge’s home. Anna died on April 14, 1934 at the age of 92.

On Nov. 24, 1926 Esther & Abraham Kaplan & Abraham D. Meltzer of Boston purchased the property. A year later they moved the Richards house to the rear of the lot and turned it to face Punchard Avenue. It was then converted into apartments and the current business block on Main Street was constructed. The house was listed in the 1930 directory as “The Warwick Rooms”, now serving as a boarding house with small apartments. The property was finally divided into two separate lots in 1933 creating the current lot at 2 Punchard Ave. Thomas & Monica Connolly bought the house on Oct. 5, 1933. Thomas J. Sr. was a foreman with the American Woolen Company and sons George A. and Thomas J. also worked for the company. Monica A. Connolly is listed as a mender in 1935. The Richards home now is listed as multiuse residence with both professional law offices and apartments.

This corner lot was once the site of the Universalist Society Meeting house built in 1838. Punchard Ave., first called Universalist Court and was renamed after the Punchard Free high school was built in 1855. When the church disbanded in 1865 the Town of Andover purchased the lot and converted the former meetinghouse into a Grammar School in 1867. On Saturday April 26, 1879 the town auctioned off the property for $900 to the heirs of the Henry W. Abbott estate. The old Grammar school building was auctioned off for $75 to John H. Flint who sold it to Albert Bancroft a month later. Mr. Bancroft then moved it to his property at 9 Bancroft Road and converted into a barn. As stated above; the lot remained vacant for eight years then sold to Dr. James F. Richards for $1450 in April 1887.

Punchard Avenue was laid out in 1858 by William Sullivan of Lawrence ($ 4.25 per rod.) It was first called Universalist Ave. and Court and was the way to the Punchard Free School. It was later extended along the south side of the Park then turned left and headed north connecting with Elm St. That extension was later renamed Whittier St.