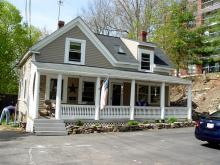 Abbott Village was established early in the 1800's with an more than adequate source of water to power the mills. Abel & Paschal Abbott moved their wool mill operation here from North Parish about 1813 and had a successful business until about 1838 when the market turned. The mill buildings were sold to Smith & Dove Manufacturing Co. in 1843. The flax to linen thread company was established in Frye Village in 1835 (Shawsheen Village) and relocated up river to this location.

This home was most likely built for a mill worker and his family but also has a long history as a rental property. Timothy Callahan purchased the property through three separate deeds. The first deed was from Patrick Donovan on Jan. 15, 1859. Donovan owned a house on Baker Lane. The second parcel was from Jonathan Merrill on May 23, 1859 and the last lot purchased from W. Phillips Foster on April 26, 1863. The total parcel now included 1 acre 40 sq. rods. Timothy took a $500 mortgage through the Trustees of Punchard Free School on Sept 19, 1871.

After Timothy's death his wife Ellen Callahan inherited the property and paid off the Punchard loan on Nov. 12, 1900. Ellen died in 1905 and son Timothy Callahan was the administrator of her estate. The property was transferred to him by Louis V. Golden on Jan. 3, 1906 and in July Callahan sells the 1.4 acre property to Elizabeth Carroll.

Elizabeth Carroll later marries John Eliot and lived in North Brookfield, MA. She held the house for 7 years. The property was sold to James McGinley in three deeds which included the house lot of 1.4 acres and a small parcel in front of the house marked lot #30 on Plan Map #676. It is now part of #17 Baker Lane property. The McGinley deeds are dated Jan. 1913. A third deed consolidates the two parcels in Feb. 1913.

James McGinley sold the property to the Smith & Dove Manufacturing Co. on Dec. 6, 1918. Other properties on Baker Lane were also acquired by S & D. Co. at this time.

Smith & Dove recognized the need for operative housing and slowly acquired several homes in the immediate area. They also built quality housing for their working force at 62-84 Essex St. about 1902 and the double homes on Brechin Terrace in 1907-08. Every home on Baker Lane was eventually owned by Smith & Dove. William H. Skinner conveyed all rights on Baker Lane to John Smith, President of Smith & Dove Co. on May 18, 1850. It was the first of eight properties acquired by the company on the lane between 1850 and 1918. The company reorganized in 1864 and again in 1912 bringing all their properties together into one deed.

William J. & Mary Snyder purchased several properties from Andover Homes Inc. on July 6, 1928. The lots included 29, 30, 31, and part of 32 on map 676 of the Smith & Dove Plan of 1927. It included the two houses at #17 and #21 baker Lane and the lots adjoining each property. When Willam Snyder purchased the properties they lived in #17. His occupation was an Ice Man for a local company. With the surge in electric refrigeration the ice demand dropped and Snyder was then employed at the Essex Bowling Alleys in 1937. They moved over to #21 about 1935. William later became the custodian at Punchard High School. William retired in 1952. After his death in 1953 his wife Mary continued to live in the the home. A plan of their property was drawn and surveyed in July 1964. Former lots 30 & a portion of 32 had been consolidated into on lot at #17. Number 21 was subdivided into two separate lots.

Brucato held for four years selling to Scott A & Ellen Bowman in Aug. 1979. They owned just over one year then selling to Berinice L. Shapiro in Nov. 1980. The property then went to Stephen D. Shapiro in 1985.

Doughlas Mifflin purchased the house in Oct. 1987 and it was placed into the Douglas R. Mifflin Nominee Trust in 1991 with Lisa A. Getchell trustee. Glenn D. Ippolito purchased the property in May 1996 and is the current owner in 2014.

The home has been rented through the years. George & Dorothy Piercy lived next door at 20 Baker Lane but later moved into this house. Dorothy is remembered for her mural of downtown Andover, now hanging in the Town Office building but hung in the popular Ford's Coffee Shop from the late 1950's until the restaurant closed. It was painted at the dining room table in this house.