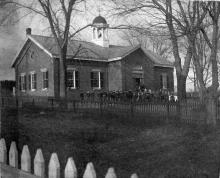 This site which is now used as open space and a playground was once the site of the Frye Village schoolhouse.

In 1795 the town created twelve school district in the town then including what s now North Andover. (North Parish). On the west end of town the Chandler School District was divided off and the school placed near the center of the district. The first schoolhouse was located on the north end of what is now Chandler Circle. All students who attended walked the 1/1/2 mile trip up Lowell St. to Chandler Road. A new schoolhouse was built in June 1803 on the same site and the old one sold at auction for $36.25 to Philemon Dane of Argilla Rd. on March 1, 1803. The school was "painted red clapboards with white trimmings" in the spring of 1809. Some discussion took place in 1810 of dividing the district and hiring two teachers for the summer school session. In March 1812 the Town Warrant article to divide the school district was place to a vote but no action was taken. It would be another twelve years before the district divided and a new schoolhouse for the east end of the district was built.

The vote occurred on January 19, 1824 creating the Chandler School District Easterly Part and to build a school at a cost of $120 dollars. The building committed completed the new school on October 19, 1824. The new site of the school was located between Poor and North Main Streets on land that belonged to Mr. David Holt near Windsor Street today.

On April 24, 1827 - "voted to set up new boundaries of the district beginning at the parish bound east of Elijah L. Herrick's thence to the barn east of Lovell Faulkner's, thence to the barns north east of Simon Ames on the cart way leading to Mr. John Poor's and on said pathway to the road."

Ten years later the issue of who owned the school site land occurred and Holt demanded payment. The committee did not agree to his price so a new lot was chosen and the schoolhouse moved to the site. "the dimensions being three rods square of land belonging to Enoch Frye 3rd and situated on the old Boston Road between the house of said Enoch Frye 3rd and the house of Samuel Frye.

As the district grew in population, due in part to the Smith & Dove Manufacturing Co. in Frye Village, at new schoolhouse was needed. On March 2, 1848 the district vote to build a new school on a half acre of land on Lowell St. owned by John Dove. They paid $217 for the lot. They then "chose John Dove, Elijah Hussey, and John Burnam a committee to get a plan for a schoolhouse sufficient to hold 150 scholars."

The architect was Jacob Chickering. Robert Simpson and Moody Russell were the contractors and Benjamin Gleason of B & G. Gleason was the mason. The contract was witness by John Smith and M. W. Burke. The building was to be completed three months after it was signed on May 8, 1848 which included the schoolhouse, woodshed privies, a well pump and fenced in yard.

The school had two rooms, one large room holding 48 desks and 96 chairs, and the smaller room with 15 desks and 54 chairs. all fastened to the floor. Tops made of Cherry and the legs and sides of Maple or Birch and stained to represent Cheery. Two boxes for books in each desk. 24 chairs to have stout Mahogany arms and a box under the seat for books. All desks and chairs numbered, one ink stand with slide cover put into the tops of the desks. The exterior trim and blinds were three coats of Paris green. Cupola put up and finished inside and out, tin roof, weather vane & pointer put on cupola worth $18. The grading and foundations were the districts responsibility to get it ready for construction to begin. The cost was $3000.

The District was renamed Frye Village District about 1832 and the schoolhouse was renamed the Warren Richardson School in 1892. Warren Richardson was the first business partner of John Smith and Joseph Faulkner who built their machine shop for building wool looms. The mill was on the east side of the Shawsheen River at the NE corner lot next to the Haverhill St. bridge in Shawsheen Village today.

Richardson was born in 1794, married Lucretia Ward b. Jan. 13, 1799 in Athol, MA. They adopted Lucretia's niece, daughter of her brother, also named Lucretia Ward b. in Athol in 1828. Warren Richardson died on Nov. 24, 1829 at the age of 35. He left $1000. for a book fund for the school, the "Richardson Fund", His wife continued to live in Frye Village in her home which was located opposite Balmoral St. on what is now part of Wood Park. Lucretia died Jan. 17, 1888 at age 89. Their daughter Lucretia Ward Richardson, would later marry George H. Torr, who would later become president and treasurer on the Smith and Dove Manufacturing Co.

The school house would remain in use until the construction of Shawsheen Village. With the increased housing market and families the school quickly became over crowded by 1922. Shawsheen School was built to meet the needs of the growing village. The Richardson School closed in October 1924. It was used for several years as a meeting hall for local organizations and opened nearly every summer for summer playground activities. The building was finally razed in the early 1960's. The bell is said to have been saved and later installed in the new Bancroft School in 1969. It later cracked and was replaced.

After the school was razed the empty lot was graded and seeded and used as a park. In the 1970's residents of Shawsheen wanted a playground for their children. They raised funds and built "Penguin Park" on the site. Much like the "Dragon's Lair" at Bancroft School, the park was extremely popular. The lack of parking and the busy Lowell Street prompted the town to move "Penguin Park", for safety reasons, to the SE corner of Balmoral Field area off York St and Burnham Rd. Another playground was later built on Balmoral St. in an area once occupied by tennis courts during William M. Wood's development of the village.