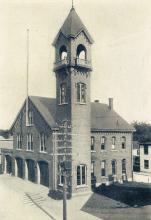 The current municipal parking lot behind the Old Town House & Hall was the site of the former brick Andover Fire House constructed in 1883. This was the third firehouse to be constructed in Andover since the division of the two Parishes into separate towns of Andover & North Andover in 1855.

The first Engine House was constructed on the corner of the yard on land owned by Jacob Chickering at about 28 Essex St. in 1833. The Engine house was later moved to 70 Main St. and tucked in between two houses, now the location of the current CVS pharmacy counter. The wooden building was later remodeled and enlarged. The firehouse was raised up 18” to accommodate the new steam engine and an addition on the rear for two horse stalls, and feed storage. This small one engine fire department served the needs for the town. Most of the major companies in town had their own fire apparatus. Andover would later build a second firehouse in Ballardvale.

Park Street was constructed in the autumn of 1873. It began at the present corner on Main and extending east to Whittier Street, which was then part of Punchard Avenue. Punchard Ave., originally called Universalist Court, went from 98 Main Street and turned left at Punchard Free School, then an immediate right around the south end of Richardson’s pasture, now the “Park”, then north to Elm Street which is Whittier Street today

October 10, 1873 AA – Edward Adams of North Andover has taken the contract to build the new road from Main Street, near the Town House, to Punchard Ave. for $1300.

Oct. 24, 1873 AA – Ground has been broken for a new street near the town house on Tuesday and Mr. Adams is pushing things. The contract provides for its completion on the first of December.

The Old Town House was built in 1858 as Andover’s first municipal building. In 1881 the building was enlarged with a rear addition that provided a larger Town Hall with new stage area, rear staircases, new privies, and relocation of the town hay scales to the rear of the building.
September 16, 1881 AA - The laying of the brick on the town house extension has commenced by Messrs. Gile & Son, and they will vigorously push the work forward to completion.

In 1881 the Fire Company was pushing for a new, modern and larger firehouse that could accommodate more than one steam engine. They needed room for a ladder wagon, team of horses, and a tower for drying hoses. A meeting hall and sleeping area were also desired to provide for "around the clock" fire protection coverage. At town meeting in March 1882 action was taken to build the firehouse and $10,000 was appropriated for construction. Architect Charles T. Emerson of Lawrence was hired to design the building. Andover builders Abbott & Jenkins were the contractors. The building was brick 42 x 56 feet, two stories with a slate roof.

The Italianate style was designed to complement the Town House next door. The tower served two purposes; to dry fire hoses and hold a bell to signal the alarms. Electricity did not come to Andover until 1889. The three bay station was later enlarged to four bays with an addition on the east end of the building in 1899.

With electricity came the fire call boxes and an automated signal system. A whistle was placed in the tower and when a call box was pulled, a series of short and long blasts alerted firefighters and residents in town as to the location of the fire. Andover school children remember well the "No School" signal as 3-3-3 and waited to hear that whistle on a snowy morning.

This central location seemed ideal location when the firehouse was built but with time it proved problematic. The new motorized fire engines were larger and longer than those in the 1880s. It became difficult for the trucks to make the turn onto narrow Park St. and then turn again onto Main St. The maneuvering in and out slowed the response time to any emergency.
In 1968 the town began planning for a new firehouse. The site of the former Tyer Rubber plant on North Main Street was chosen for the new building. The old firehouse was then vacated and for a short time used as a teen drop-in center. The building was razed in 1971.

March 3, 1882 AA pg. 3 col. 3 Town Warrant. - Art. 18. To see what action the Town will take in reference to building a new Engine House and purchasing horses necessary for the use of the department: also what sum of money they will appropriate therefore.

March 10, 1882 AA pg. 2 col. 9 - The steam engine arrived in town last Wednesday, after a somewhat protracted absence for repairs. The engine was taken to the reservoir on Central Street for trial, and proved to be in excellent condition. A new boiler has been in and our citizens are glad to see the stranger back once more.
The liberal appropriation of $10,000 was made for the erection of an engine house, and the following building committee; M.C. Andrews, J.L. Smith, S.H. Boutwell, J.H. Flint, J.W. Poor. It will be built upon the towns land on Park Street, in the rear of the town hall. The location is an eligible one and no doubt the building, besides answering the important purposes for which it is intended, will be an ornament to the place.

May 19, 1882 AA pg. 2 col. 7 - The Steamer Engine Company had their annual supper at the engine house on Monday evening. E. D. Hatch caterer. The guests of the occasion were the Selectmen, engineers, building committee of the new engine house, and past officers and engineers. Sociability prevailed and pithy remarks were made by J.L. Smith, J.S. Stark, Charles Greene, M. E. White, M.C. Andrews, J.H. Flint, C.W. Hayward and others.

May 26, 1882 AA pg. 2 col.8 - The committee chosen by the town for the erection of the new engine house, has made choice of John H. Flint as chairman, and John L. Smith, clerk. Charles T. Emerson of Lawrence is the architect. The building will be of brick 42 x 56 feet, two stories. The specifications are not yet completed but it is expected that the work will be finished the present season.
Col. 9 - The engineers of the fire department have organized by the choice of John L. Smith, chief engineer, and Frank Smith, clerk.

June 2, 1882 AA pg. 2 col. 9 - The steamer Engine Company, with their machine, visited Ballard Vale on Saturday afternoon for practice, and after successfully testing the engine, were furnished abundant refreshment by Shawshin Engine Company. No. 2 of the Vale.
Pg. 3. col. 1 – The committee on building the new engine house, it will be seen advertise for proposals. See col.4 pg.3.

June 23, 1882 AA pg. 2 col. 8 - The committee on building the new engine house have awarded the contract to Messrs. Abbott & Jenkins for $8800. It is to be of brick & completed before the first of next January.

Nov. 6, 1885 AA P3 –The Engine Company & Hook and Ladder Co. who were photographed by McCormick of Boston, some days since, have received the proofs, and general satisfaction prevails [These photographs are now on display in the Town Office building]

April 14, 1893 AT – C. B. Mason has been awarded the contract for building a shop for the Andover Water Works. It will be located on the vacant lot next to the engine house

July 21, 1893 AA - P5 col. 1 The building for the Andover Water Works on Park Street is nearly finished and will soon be ready for occupancy.

July 15, 1898 AT - The contract to supply bread to the Italians working on the sewer has been given to Frank P. Higgins & Co. P4 Sewer Work Progressing.

July 15, 1898 AT p. 4 - The contract to supply bread to the Italians working on the sewer has been given to Frank P. Higgins & Co. - Sewer Work Progressing.

July 21, 1899 AT – p1 The foundation is nearly completed for the addition to the engine house and the iron girders are on the spot ready to be placed into position.

Mar. 9, 1906 AT – Samuel P. Hulme, the well-known photographer, has presented to the Andover Steam Fire Engine Company a set of the individual photographs of the members of the company, framed in a large group. The likenesses are excellent and the picture is one which will be greatly prized. It will be hung in the assembly room at the engine house.