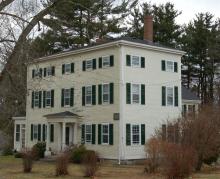 Owner: Trustees of Phillips Academy - turned over to Samuel Farrar, who bequeathed back, boarding house for students after 1864, under direction of Mrs. Serena T. Abbot, (Sarah F.) niece of Squire Farrar.

While waiting for house to be built, Samuel Farrar boarded with Ezra Abbot on Central St. Its original site was corner of Main and Phillips St. where archaeology building now stands. In 1880, it was moved further along Phillips St. to make room for Professor Churchill's home (large, pretentious and in the "latest" style).

Samuel Farrar was born Dec. 13, 1773 in Lincoln, MA son of Samuel & Mercy (Hoar) Farrar. Samuel graduated from Harvard in 1797 and was a tudor there in 1800. Samuel became a lawyer and was one of the chief founders of the Andover Theological Seminary. Samuel married on Oct. 30, 1814 in Andover to the widow Phebe (Edwards) Hooker. Phebe Edwards was born Nov. 4, 1768 in Elizabethtown, NJ, dau. of Hon. Timothy & Rhoda (Ogdon) Edwards of Stockbridge, MA. Phebe first married the Rev. Asahel Hooker b. 8/29/1762 in Woodbury, CT who died 4/19/1813. Phebe & Asahel had four children; Timothy Edwards, Edward William, Mary Ann and Sarah Elizabeth Hooker. Phebe Farrrar died on Jan 22, 1848 age 79 years and is interred in Chapel Cemetery, Phillips Academy.

Squire Farrar was one of Andover's leading citizens, and a local character whose life was so methodical and habits so punctual that clocks were said to be set when he commenced family prayers or passed on his daily stroll to Indian Ridge. Farrar was first president of Andover National Bank, 1826-1856 and its director, 1826-1857. He was treasurer of Board of Trustees for Phillips Academy and Andover Theological Seminary, first librarian of Andover Theo. Seminary and an Abbot Academy Trustee. As Phillips Academy treasurer, he was provided with a place to live and from 1811 until his death in 1864, this was his home.
Madame Phoebe Foxcroft Phillips, wife of Judge Samuel Phillips, also stayed here and died in this house in 1812. Another resident was the famous first missionary Adoniram Judson sent out by the American Board of Foreign Missions, based at Andover Theo. Seminary:
C. Haywards was another boarder, 1881.
In Jacob Chickering's accounts, (North Andover Historical Soc. ) is an updated receipt:"Arthur Bean Revised Esq. Farrar's Olde Barn 28 x 35' at $150 to take to Methuen.."
Squire Farrar died on May 13, 1864 and bequeathed house to the Trustees of Phillips Academy and his niece Sarah (French) Abbott was the niece, widow of Rev. Sereno Abbott. Sarah was born on May 25, 1820 in Hampton Falls, NH dau. of Rev. Jonathan & Rebecca (Farrar) French. Her mother was Samuel's sister. Rev. Abbot was born in Andover in 1805, son of Asa Abbott. He was the pastor of the Line Church in Seabrook and Hampton Falls NH from 1836 until his death in May 1855. Sereno & Sarah had seven children: George, Adelaide, Annie, Albert F., Mary F., Harriett E. and John Alden.

Sarah F. Abbott came to live with her Uncle Samuel Andover in 1858 and lived with her seven children and managed boarding students at the Academy and Seminary. Her daughter Adelaide died here in 1860. Sarah remained in this home until it was moved and she purchased the Upton house at 132 Main Street. Sarah continued to board students until 1904. That year at age 83 she attended the Worlds Fair in St. Louis. Sarah died on April 28, 1905 age 84y 11m 3d. and is interred in the Farrar lot at the Chapel Cemetery in Phillips Academy.

Mrs. Roy Spencer was occupant in 1939. In (1975-77) it was the residence of Frederick S. Allis Jr. of the history department and former president of the Historical Society.