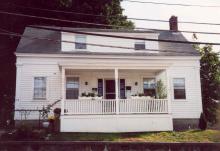 The east end of the parking lot on Pearson St. of the St. Augustine's Church was once the site of a Greek Revival home that was dismantled in 2007. Expansion for parking and construction of the new church Educational Center on Essex St. forced the removal of the house. Moving the home to a new site was first considered but it was later dismantled by Michael Ristuccia and boxed into storage. It has been stated that the house was rebuilt in New Hampshire at a later date.

Moody Russell purchased this lot from the Widow Rachel Abbott of Lowell on Nov. 2, 1844 for $80. Moody was a carpenter who learned the trade working with Jacob Chickering. . Moody Russell was born on Sept. 1, 1808 in Alfred, York Co., Maine, son of Clement & Nancy (Warren) Russell. He moved to Salem, MA and worked on the Pickering Farm. Moody married on June 21, 1829 to Frances “Fanny” Wardwell b. Sept. 7, 1804 in Andover, MA, daughter of Gideon Church and Joanna (Durant) Wardwell. Moody learned his trade as a carpenter from Jacob Chickering.

Moody sold this property to Anthony Milner on June 4, 1863 for $900. Milner owned for three years then selling to Robert White a physician from Boston. White paid $1050 for the house. White owned for ten years then selling to Unity Logue, wife of Daniel for $1075 on July 29, 1876. The deed was then transferred through Moses Foster to Daniel Logue the same day. Two months later Logue sold to James Donahue on Sept. 25, 1876 for $1850.Donahue held the property for 17 years then sold to Patrick H. Madden on July 8, 1893.

The Madden family remained the owners of the property for 105 years. The house was converted from a single family home to a two family and one side rented for income property. Sarah G. Madden had the house after Patrick, until her death on Jan. 26, 1975. The property then went to Margaret P. Madden, by will on Nov. 8, 1977 through probate and land court. The property was transferred to Edward J. Madden on Nov. 18,1977. The title deed was changed to Edward J. & Barbara M. Madden on June 27, 1986.

The Madden family sold their property to the St. Mary's Church Society of Lawrence on July 10, 1998. The property deed was then transferred to the Roman Catholic Archbishop of Boston on May 10, 2006.