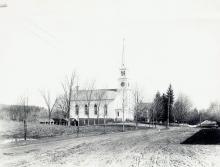 In 1840 nearly all the land west of the railroad tracks on Railroad St. was vacant land and meadows. The Nathan Frye house at 166 North Main and the Jonathan Merrill house at 18 Railroad St. were the only two homes standing at that time. The Boston and Maine Railroad purchased the old Andover & Wilmington Railroad and relocated the tracks to the current position in 1847 and opened in February 1848. The new City of Lawrence, established in 1845, needed rail service so the line was moved to accommodate the growing city. The B&M RR purchased 14¼ acres of land from Joseph L. Low for $4750 which included most of the land on Railroad St. and extended down to the Marland Mills pond.

During the same period of time John Smith, President of the Smith and Dove Co. in Frye Village and an Abolitionist, left the West Parish Church over the issue of slavery and established a new church called the Free Christian Church organized on May 7, 1846 at house of Stephen Dinsmore, corner of Main and Chestnut (old Capt. Joseph Richardson House, site of Andover Press building 60 Main St.).

A "Small group of consecrated men and women" began to meet on Sundays at various homes "aroused at the evil of over two million Negroes held in bondage" and distressed that local churches were not taking a stronger stand on the issue of slavery. Abolitionism was a controversial issue in the 1840's and abolitionists were refused recognition by the Andover Conference of Congregationalists. Local churches were closed to abolitionist meetings. Charter members of the new church came from local churches; 17 from West Parish,14 from South Parish, 10 from the Methodist Society and 3 from the Baptist Church who wanted to be free from all alliance with slavery. Founded on the Congregational doctrine, its anti-slavery stance went further, "no one was admitted who was a slave holder or apologist of slavery, nor any who manufactured, sold or used intoxicating drinks"
Although slavery had been abolished in Massachusetts in 1789 it continued throughout the southern states. Most local churches had taken the stand against slavery but would not go further to deny apologist communion and membership.

They first rented the Universalist Church formerly at 96 Main St. on the corner of Punchard Ave. In 1849, John Smith purchased the disbanded (1841) First Methodist Episcopal Church built in 1832 located at 126 Main St. near the corner of Morton St. The building was cut in half and the two sections moved to a lot of land in Abbott Village on what is now Railroad St. Smith purchased the property from the Boston & Maine Railroad. No image or description of the Methodist building has survived but we assume that it was probably in the Greek Revival style. Situated in the new location on a foundation with a full basement, the portico entrance tower and spire were added transforming it into a Gothic Revival style house of worship.

The building was dedicated on March 8, 1850 and was familiarly known as “The White Church”. Rev John L. Taylor, pastor of the South Church read the Scriptures, “which seems to show that the church was already on good terms with its neighbors.”

“It should not be inferred that when the Free Church was organized, there existed any demonstrative opposition; or that it was born of dissension and strife. Difference of opinion there certainly was, but there was no quarrel. The men and women who organized the church and made it what it was, did so from the deepest conviction of duty. They could not have done less, with their views of truth and obligation, and been loyal to Christ.” Many of the parishioners of this church have been connected to the Underground Railroad movement in Andover.

John Smith financed the entire project of the reconstruction and remodeling of the new church. On August 21, 1856 John Smith conveyed the deed to the Deacons of the Church; James Smith, Ephraim Emerson, Joshua Blanchard and Ammon Russell, “said Church edifice together with the Bell, Town Clock, Gallery Clock, one marble top table, one Pulpit Sofa, Chairs, lamps Settees and table in the vestry and the Furnace for heating said edifice, and all the personal property of every description belonging to me and now contained in said church edifice.”
Smith also created an endowment with thirty shares of B&M Railroad stock, the dividends to be used to purchase additional B&MRR stock until the total stock value reached $5000. At that time the funds were to be placed in the “Smith Fund” trust for church use.
The church edifice and parsonage served the parishioners for 57 years at this location. A long line of horse sheds were also added to the rear of the church for parishioners.

Andover Townsman July 6, 1894 p.1 – Mr. Booker T. Washington, principal of the Tuskegee School for colored people, will speak in the Free Church next Monday evening, at 7.45 o’clock, upon educational work for his people in the South. His remarkable success as an educator and public speaker should give him a full house.

In 1901 the congregation began planning for a new larger church, in a location more centrally located and presumably far away from the noise of the railroad. On September 21, 1907 the new edifice was dedicated on Elm Street. The former “White Church” and land was sold to the Boston & Maine Railroad for $6000. The parsonage was sold to Justin E. Clark of 33 Maple Ave. The building however had to be removed from the property.
Justin Clark purchased a lot of land on Feb. 10, 1909 at 7 - 9 Buxton Court from Hardy & Cole, prolific contractors and builders in Andover. Clark probably converted the house into a two family residence at this time and used it as rental property. Justin was a telegraph operator, member of Free Church and neighbor of Lewis T. Hardy.

Andover Townsman - April 16, 1909. Old Manse Removed.
A clever piece of work was that performed by the Wilson Building Moving Company of Lawrence, at the B. & M. freight yards, this town, last Monday afternoon, when they moved the Old Free Church manse across the tracks. The job had to be done between trains, with barely an hour of time in which to do it, but the time was ample, for in just 35 minutes the building which had been on the west side of a space four tracks in width, rested on the east side, and that too, without the slightest hitch in the work. The building was purchased by Justin Clark of Maple Avenue and is now located on a lot of land owned by him on what is known as the Lowe [sic] estate, on North Main street.

The church was razed but much of its construction materials were harvested, sold and recycled. Some parts of the original structure were salvaged. Some of the windows were used in a garage/barn on 62 Porter Rd. once owned by Mr. & Mrs. Walther Sullivan in 1956. Some interior window shutters made their way to a Lovejoy barn loft and were given by George Winslow to Abbott Batchelder who incorporated them into two loft bedrooms in their camp in Derring, NH. When the camp was sold, son James Batchelder rescued the shutters and they were returned to the Free Church in Andover in 2016.

The Boston & Maine ran spur lines west of Railroad St. to the coal pocket of the new Tyer Rubber Co. plant built in 1912, opened in 1913. Later the site held a cement mixing facility operated by the Wilson Co. This site today is now the MBTA parking lot.