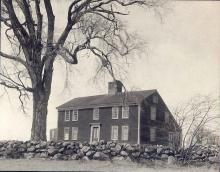 Built in 1705 - 1713 First Period home, Georgian style farm house. Classic saltbox New England home, 6 over 9 double hung windows, massive center chimney, unusual angled west side addition most likely constructed to conform to the curve in the road. The section of Wildwood Rd. from Holt to South Main was built after the Essex Turnpike was built in 1806. Known for a short period of time 1901-1920s as D'Arcy Road.

The property at the northwest corner of Wildwood and Holt Roads is now occupied by five different homes all built in 1972. The parcel however has a unique and historic history. Three different homesteads have occupied the former 9.9 acres parcel built between 1705 and 1915.

The first home to occupy the site is said to have been built by John Holt in 1705 and passed down through family until acquired by Jonathan Cummings in June 1766. Daniel Cummings sold the farm to Samuel Jenkins for $2800 in 1823. The homestead was then purchased by Thomas D’Arcy in 1900 and transferred to his father Michael D’Arcy in 1901. D’Arcy lived here until his Mansion house was completed behind the old homestead in October 1901. The old Holt homestead was then razed.

Sarah F. Jenkins would sell the family homestead to Thomas F. D’Arcy on Apr. 9, 1900. The farm contained four parcels of land, the first lot held the house. D’Arcy also purchased the Jones farm and homestead at 233 Holt Rd. to the north the following day. These properties would be transferred to Thomas father Michael D’Arcy in 1901. The D’Arcy family lived here until the completion of the D’Arcy Mansion behind the old Holt-Cummings- Jenkins Homestead in October 1901. The home and barn across the street were then razed in 1901-02 and the house site became the front lawn and drive into the new home.