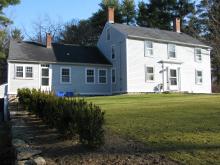 House in approximate location on 1884, 1888, 1906 and 1926 maps, not before. Locally known as being moved from Boxford and having an early intact kitchen according to Steve Delaney, Phillips Academy. House was moved (dragged by a team of oxen) to present location about 1805. Its attached barn was detached, brought along, and separately located a bit south of the heating plant. The dining room was the former carriage house. Present kitchen and back porch rooms were added later.

In the 1930's the house was remodeled to serve as a retirement home for Thomas Cochran, but he died before he could move in. Also housed Phillips Academy boys until 1959.