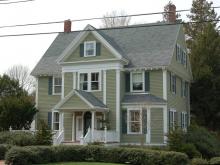 The Rev. Charles C. Carpenter lived at Wheeler House while his house was under construction by contractor William S. Jenkins in 1894. Carpenter had lived at 77 Bartlett St. and sold that house to E. Francis Holt in Aug. 1902.

Charles Carroll Carpenter, a clergyman who retired to Andover and became a writer of local history, antiquities and a genealogist. Carpenter was also a journalist and was the first editor of the Andover Townsman, founded 1887. Carpenter was a scholar more than a journalist, so was succeeded in 1889 by John N. Cole, though he continued to contribute articles and columns.

C. Carroll Carpenter was born on July 9, 1836 in Bernardson, MA, son of Elijah Woodward & Vallonia (Slate) Carpenter. He was one of five children. He graduated from Andover Theological Seminary, 1875, was missionary to Labrador. Rev. C. Carroll Carpenter married on May 1, 1862 in Auburn, MA to Nancy Feronia Rice b. July 28, 1840. They resided in Auburn and then Peabody, MA during his ministry before moving to Andover in 1882. Carroll and Feronia had five children; four survived; George Rice. b. 1863, Charles Lincoln b. 1867, William B. b. 1869 and Jane B. b. 1872. C. C. Carpenter was a founding member of the Andover Historical Society in 1911. He became necrologist for town's educational institutions, edited catalogs - wrote pamphlets for them. Chronicles and collector of local history - his scrapbooks are a valuable source of Andover Historical Society. Carroll died on Aug. 19, 1918 and his wife on June 10, 1939. Both are interred at the Chapel Cemetery on the Phillips Academy campus. The home remained with his family until 1944. His daughter, Jane B. Carpenter became historian of Abbot Academy.

Builder of house was William S. Jenkins. George B. Mason may have done the plans - Fuess, Claude. Andover: Symbol of New England states in his book on pg. 37, MS 433