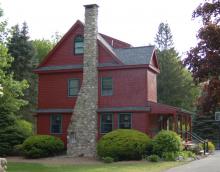 This property was once owned by Rufus Caldwell and was part of his 75 acre farm. His house was located east of Boston Rd. between So. Main St. His estate was auctioned off after his death in October 1891. The property was purchased by Brooks F. Holt for $1500. Brooks F. Holt had a home on South Main St. near Wildwood Rd. and he was an Ice Dealer in town. Brooks later sold his business and began selling off parcel of the former Caldwell farm. It is not know if he built this home or if it was enlarged by the next owners.

A one acre parcel was sold to Charles W. Damon on June 4, 1915. Charles purchased an additional 5 acre lot from Holt on Apr. 6, 1916. This parcel contained a "barn on poles" which Holt reserved for his use as well as a right of way to it across the property. Although the deed does not mention the house, a 1906 map of Andover clearly shows a house and barn at this corner and marked B.F. Holt.

The 1910 Census listed Charles job as "removing moths for the State". This was the early outbreak of Gypsy moth infestation. in 1920 Charles worked for Tyer Rubber Co. and during the depression returned to Gardener for a private family. The 1920 Andover Valuation Schedule list Charles W Damon as Main St. - Camp $175, 1 acre $100, barn $300 and 5 acres $300. - total $850 assessment.