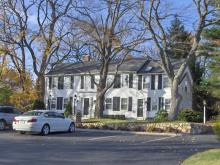 The old Joshua Chandler Homestead was built on Chandler Road that began at Lowell Street across from Lincoln Street and extended all the way to River Road. The former Chandler farm was purchased by William M. Wood, president of the American Woolen Co., for the purpose of building a country club and golf course. When the Andover Country Club was completed in 1926 the southern end of Chandler Road was closed at Beacon St. The remaining south end became Chandler Circle with the Chandler house the end of terminus at #59 and sited in the middle of the fairways.

In 1795 the town created twelve school districts and this area became the Chandler School District. It was the largest district in area in the South Parish and extended all the way to Frye Village now Shawsheen Village. The district built a new schoolhouse in 1803 “near the spot where the old one stands.” The committee included, Joshua Chandler, Capt. Jeduthan Abbot, Ephraim Abbot, Palfrey Downing and Gideon Foster. The first site of the school was near Joshua Chandler’s house. In 1811 they proposed to divide the district with two schools one at the East end and one in the West end. This was finally realized in 1824 but with the creation of the West Parish in 1826 the West Chandler School in the West Parish became the West Centre School district and the site of school was moved to Beacon St. neat the intersection of Lowell. St.

Brothers; Joshua Herbert Chandler would marry Eldesta C. Goldsmith on June 9, 1858. Eldesta was born on Aug. 9, 1838 dau. of Daniel P. & Rebecca (King) Goldsmith. Joshua was a farmer and would inherit the Chandler farm. They had two daughters; Nellie Eldesta b. July 3, 1858 and married Joseph Warren Mooar and Bertha Amanda b. Mar. 9, 1861. Bertha married Frank E. Bailey and lived at 125 Bailey Rd. They had a son Chandler Bailey.

Henry Flint Chandler b. Sept. 26, 1835 attended school at the West Centre District Schoolhouse. Later he became a clerk before enlisting as a Private with Company F, 59th Massachusetts Infantry on December 8, 1863 at age 28. He reenlisted on April 21, 1864. Henry was seriously wounded in a bayonet charge at Petersburg, Virginia on June 17, 1864 and was directed to go to the rear, but he declined to do so and remained with the regiment and helped to carry the breastworks. He rose to the rank of Sergeant and received a disability discharge on June 8, 1865. Henry was awarded the Medal of Honor for his action on March 30, 1898. He returned to Andover and became a provisions dealer in Lawrence, MA. The business was burned out in 1882. Henry married Margaret Richardson, March 7, 1867. She was born February 13, 1838, daughter of Caleb Richardson and Hanna Stevens of Andover. Martha died four years later on July 29, 1871. He remarried on March 6, 1873 to Mary Augusta Bodwell, b. 1843, daughter of Hazen Bodwell and Huldah Howe of Methuen, MA. Mary died on March 4, 1877. Henry married a third to Nellie M. Heath on June 25, 1879. Nellie was the daughter of Lewis Heath and Sarah Edwards of Andover, NH. They later lived in Lawrence Henry had four children; Harry H. b. 1867 and died 1868, Fred Nathan, born 1870, Carl Henry born April 1874, and Helen Augusta. Henry died on November 16, 1906 in Haverhill, MA. He is interred in the family lot at West Parish Garden Cemetery in Andover, MA on November 19th.

In June 1901 Joshua H. Chandler transfers ownership of the farm, 8 parcels of land, to his wife Eldesta via his nephew Frederick N. Chandler. Joshua H. died on March 17, 1903 of heart failure. His obituary in the Townsman lists the following;
“Mr. Chandler was born on the farm where he has always lived, and which had been owned by his ancestors for many years. His skill as a farmer was successful in making his farm one of the attractive places of the town. He was an upright citizen and honored and respected by his fellow townsmen and by many friends elsewhere. Mr. Chandler was a member of Andover Grange, Patrons of Husbandry, and of the Essex County Pomona Grange. He was an enthusiastic granger, and had done much to promote the interest of agriculture in Andover and surrounding towns and his general personality and warm hand clasp has welcomed many a new member to the local grange. He attended the West Parish church”.

Joshua and Eldesta were married for 50 years. Widow Eldesta sells off a two small parcels of the farm, a 3 Acre Wood lot to John White in Feb. 1902 and the “Bald Hill” lot to Henry Haight in Nov. 1905. She then old the reaming farmland and homestead on Nov. 28, 1905 to Michael & Mary J. Carroll. Eldesta G. Chandler died on April 10, 1915 and is interred in the family lot at West Parish Garden Cemetery.

Michael & Mary J. Carroll held the farm for three years then selling to Krikor Assoian on Jan. 8, 1907. This was a period of time when many Armenian families were emigrating from their homeland to escape the mass genocide. Many Armenian families settled in West Andover. Krikor Assioan owned for five years then selling to Hovannes Dagdigian in 1912. Nishan Assoian & Dan Barberian then purchased the farm seven years later on Dec. 31, 1919. Barberian sold out his share to Nishan Assoian in Nov. 1920. Nishan & wife Almas lived on the farm until 1923 when it was purchased by the American Woolen Company, with William M. Wood President.
The former Chandler farm then ceased operations as a country farm as Mr. Wood began plans to transform the land into the Andover Country Club. The Chandler farmhouse survives today amidst the development of the vacant land into condominiums and single family homes. The house has been restored and remodeled into administrative offices and condo apartment. The newly assigned address is 3 Crenshaw Lane.