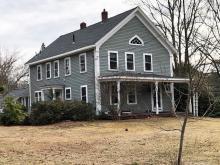 Although masked today, this home was originally built as a Gothic Revival style one room schoolhouse for the Holt School District in 1869. Gable end facing Salem St. with double entrances, left door for boys and right door for girls.

Historical significance:
This property is site of the Holt District Schools through the 19th Century. The home on this site today is actually the former schoolhouse, built in 1869, with a second story added and an ell off the back with attached garage.

HOLT SCHOOL DISTRICT - This area in town was once know as the Cape District then became the Scotland District in 1795. The Holt School District was created in 1797 by dividing the Scotland School District, to the west, in half. Prior to the creation of 12 school districts in Andover, six in the North Parish and six in the South Parish there were a hand full of outlying schools established about 1740.

Each school district had a Prudential Committee of at least three men who were responsible for the hiring of the teachers, building a suitable schoolhouse, maintenance, fuel for winter, providing water and collecting taxes from the residents of the District to cover expenses each year. There were three terms; Fall, Winter and Spring and unusually a male teacher was hired during the winter term, but in many cases women often filled the position through the year.

This former schoolhouse was the last Holt District School to be built. It may be the third building on the site since 1797. Schoolhouses were built in a central location for students to walk to school at about 1 1/2 miles distance away as the maximum daily journey one way.

On May 4, 1866 AA - the Town of Andover adopts the municipal school district system at Town Meeting, 96 yeas, 73 noes. This vote ended the District Prudential Committees and created one School Committee that established the school budget, hired teaches and built schoolhouses.

An account book found in the Old Town Hall when the offices were moved in 1983 contained early records of the first district system in Andover. This book covers the years from November 1796 to February 1804. It lists 13 school districts, names of teachers, how much they were paid, number of weeks they taught, number of families per district and the amount of money assessed each district. Some miscellaneous items also noted were rents paid, wood for fires, and repairs made to the school houses.

MS 134 XI Taft Collection; Andover Center for History & Culture
A Petition for a School Meeting
1811 Jan. 29 ...a Warrant, directed to Capt. Dame Holt, to call a meeting of the District, to meet at the house of elder David Gray as soon as may be & when met to act on the following articles.
3rd. - To see if the District will vote to build a New School House for the use of the district. If this article pass in the affirmative, than to pitch upon some suitable place
4th. - To see what sum or sums of money the District will raise to build the School House, & to defray all necessary charges --- to carry the same into effect.

1844 - The “Report of the School Committee of Andover. Page 7" In the report of 1841 it was recommended to the Holt and Phillips districts to remodel their school houses. That recommendation has not been complied with, and the scholars of those districts still suffer from inconvenient and ill-constructed houses." Peter Osgood, for the School Com. Mar.4, 1844

April 19, 1867 AA – New Schoolhouse 26 x 36 is to be erected in the Osgood district this season. The interior will be finished in modern style, and its architecture will be similar to the schoolhouses in the Phillips and Center (West) districts. It will be located near the old one, and is to be completed before the 20th of August. Several school houses are undergoing repairs, it evidently being the design of the committee to furnish uniformly good schoolhouses throughout the town.

Andover Advertiser (AA) June 18, 1869 – William S. Jenkins to build new Holt School house. Located on the corner of land of George A. Abbott. A few rods south of the old one. Amount of contract for foundation and building $1642.

With the closing of the Holt District School in 1900 the students of this district were bused on horse drawn "barges" to attend school at the John Dove School or Stowe School on Bartlet Street in the Town Center.

HOLT SCHOOL FILE (AHS) Andover Center for History & Culture
From letter of the Townsman - 1/7/1947 - "Speaking" of the transporting of the children from the Holt District School (after its closing) to the center schools. Mr. J. A. Wright did job for 37 years. Mrs. Brownell who lived in the small white house on the right hand side of Holt Road, as you turn onto it from Salem Street (just below present day track field, I believe, on Holt Road side) was the first driver (?). She used a horse drawn beach wagon barge (of that day's type) in wheeling days, with adjustable curtain sides. In snow (runner) season the vehicle was a market-wagon pung with straw on the bottom, cloth wrapped hot stones for feet and hands, and blankets, for the children, who sat on settees running along the sides of the pung body. As rare occasion demanded, Mrs. Brownell was relieved by Mr. Brownell or even by "grandpa".

Following Mrs. Brownell there may have been a short interim when another driver was in charge, but rather soon the task was taken over by Mr. Alvin Jenkins and he was followed by his son Mr. John Jenkins. These men used the horse drawn market wagon type of barge.
I believe that Mr. Wright probably took over the task from Mr. John Jenkins. PS: I was in the first group to ride, going into the 3rd grade at John Dove school in 1900 having our beloved teacher, Miss Harriet Carter" - extract from letter from Arthur K. Johnson, 70 - Thiem Ave., Rochelle Park, NJ - January 7, 1947 to editor of Townsman.

George A. Abbott owned the property surrounding the school house and upon his death the Abbott estate was sold off by William S. Jenkins, Guardian, of Abbott's three children, Allen F. Grace M. and Emma F. Abbott. Jenkins sold 40 acres with buildings to William H. Tucker on July 9, 1888. The Town may have leased the land the school was on which then reverted to Tucker.

The George A. Abbott farm is located at 12 Gray Rd. George died on Dec. 23, 1883 and his homestead was purchased by William H. Tucker in 1888. Tucker sells off the 40 acre property with the schoolhouse on Nov. 21, 1906 to Lillian R. Bailey of Saugus, MA, wife of Edward O. Bailey. The 1906 Atlas map of Andover still lists the Holt Schoolhouse. The 1910 Andover Valuation Schedule Lillian R. Bailey of Saugus; Old School House, Salem St., Holt District $700. 40 acres Land Abbott, including School House lot, Holt Dis. $1400 = $2100. Bailey held the property for seven years then sold to Willard D. Martin of Marblehead, MA on Feb. 12, 1913. Martin then sold a year later to John W. Towle, on Jan. 12, 1914. The school house conversion most likely occurred between 1913 and 1915. The property then went to Marion E. Sheldon on Apr. 20, 1915. None of these owners appear in the resident directories of the town. Sheldon sold the property a few months later to John D. Urquhart and William G. Codman of Peabody, MA on July 23, 1915.

Codman sold out his share the following month to John D. Urquhart, wife Ethel A. on Aug. 18, 1915. The Urquhart family has stated that John D. Urquhart did not convert the school into a home. On a window sill on the second story is the name J. E. Pitman penciled in. John Eugene Pitman was a contractor and house builder in town from 1889-1924 and probably did the conversion.